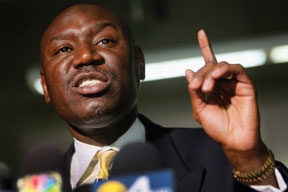 Crump to urge President-elect to embrace constitutional protections, Put an end to “open season” on people of color

CHARLESTON, S.C. – America’s civil rights movement is at a crossroads, with racial tension coursing through America’s cities and systemic prejudice creating an “Open Season” on people of color.  That will be the focal point of a major keynote address by nationally renowned civil rights advocate and attorney Ben Crump, who will urge President-elect Trump to embrace a path forward for civil rights.  He will deliver the address at one of the oldest and largest MLK celebrations — the YWCA of Greater Charleston’s Ecumenical Service during the 45th annual Rev. Dr. Martin Luther King Jr. Celebration in Charleston, South Carolina on Jan. 15. The several-daylong MLK Celebration annually attracts more than 30,000 attendees.

Crump has represented victims’ families in tragic, high-profile civil rights cases across the country, including that of Trayvon Martin, Michael Brown, and dozens of others. Attorney Crump will challenge President-elect Donald Trump to make civil rights a top priority, outlining the dire consequences of ignoring the epidemic of violence and systematic injustice against people of color across America.

Other luminaries who have addressed the Ecumenical Service to a capacity audience include the Rev. Martin Luther King Sr. (1974), the Rev. Joseph Lowery (1983), and former U.S. Attorney General Eric Holder (2016). Event sponsor YWCA of Greater Charleston expects more than 1,000 attendees at this historic service that is free and open to the public.

Nationally renowned civil rights and personal injury attorney Ben Crump today announced today at a press conference in Cleveland that he is joining Attorney John Myers as co-counsel in representing Nakia Jones in her lawsuit against the City of Warrensville Heights, the mayor and the chief of police. […]

Nationally renowned civil rights attorney Ben Crump will move forward with a federal lawsuit against pharmaceutical giant Gilead Sciences, Inc., following a California judge’s ruling upholding pleadings against the company in separate litigation. Crump has announced plans to sue the company over its deliberate actions to put profits ahead of the well-being of patients affected by HIV/AIDS, many of whom are minorities. […]