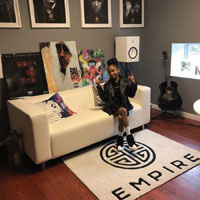 While it’s easy for people on the outside looking in to scoff at some content going viral, one can’t underestimate the effect that this lightning in a bottle can have on the lives of the people involved. Atlanta Black Star reports on one positive example of this situation, with 11-year-old rapper Alaya High getting a record deal based on the back of her Instagram freestyle fame.

High, who goes by the name ‘Lay Lay’ took to Instagram on Wednesday and announced that she signed a recording deal with music label “Empire.” She wrote, “It’s official!!! I am the YOUNGEST FEMALE RAP ARTIST to sign a record deal! I would like to thank my fans… Look out for my first single ‘Go Lay Lay Go’ ALBUM ON THE WAY! The record label first noticed the Houston native when she was recorded by her father free-styling over rap artist’s BlocBoy JB’s “Shoot” song. The initial tweet showing off her skills was retweeted over 100,000 and garnered her quite a fanbase. This marks a confirmation of something that Lay Lay’s fans may have suspected from a freestyle she shared back in July over Drake’s “I’m Upset,” complete with a shoutout to the late XXXTentacion.

“Can’t leave the kids alone/Rest in peace XXXTentacion/Glad I get to try and make a difference for XXXTentacion/Now your girl on the same label as XXXTentacion,” she rapped.     Many of Lay Lay’s fans were overjoyed to see that a professional label saw the talent they’ve already been enjoying.

“Congratulations!!! I’m so excited to see your growth as an artist,” an Instagram user said.

The young rapper added on Instagram to the announcement: “Would like to say thank you!!! To everybody, thank you sooo much! Sorry I’m behind on my freestyles…working on my album.” One would imagine that this is something that fans would be more than happy to wait for.