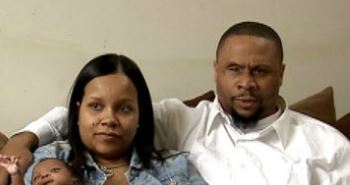 When the tragedies of life hit us, they can often hit without mercy. A man in Michigan knows this all too well, as he is trying to find a way to provide for his family in the face of overwhelming odds.

Sean Kelley is about to be homeless, along with his wife and nine children. He was shot a few months ago after leaving a night club. The shooting left him blind and unable to work.

“I could see this evil face. He squinted his eyes up, and he had this gapped tooth in his mouth, and he just shot the gun,” said Kelley.

Sean lives in Detroit, where gun violence is entirely too common these days. Sean describes the shooting in detail and what he went through.

“I felt something rattling in my mouth. It was the bullet in my mouth,” Sean said. “That was the last time I saw something.”

Sean is now entirely blind after the shooting, which took place on January 12. The bullet went through his right temple, taking out his vision. He not only lost his sight, he also lost his ability to taste and smell.

Sean was a hardworking man. He lost his job at DTE Energy, where he’d been working for the last 16 years. His wife quit her job to take care of the kids, especially since they had a one week old baby at the time of the shooting. This is when the family got their eviction notice, telling them to vacate their Lincoln Park home on May 8..

“I made a vow and went before God and said I’d be with my husband no matter what, through sickness, through wealth, through poor, and that’s what I’m doing. I’m keeping my word,” Laronda Kelley said.

“I wonder why God allowed it to happen that way, but I appreciate… exactly how he orchestrated this,” Sean said.