BOSTON  — Two bombs exploded near the crowded finish line of the Boston Marathon on Monday, killing two people and injuring more than 50 others in a terrifying scene of broken glass, smoke and severed limbs, authorities said.

A third blast rocked the John F. Kennedy Library a few miles away and more than an hour later, but no injuries were reported, the police commissioner said. A senior U.S. intelligence official said two other explosive devices were found near the marathon finish line.

There was no word on the motive or who may have launched the attack, and authorities in Washington said there was no immediate claim of responsibility.

The twin blasts at the race took place almost simultaneously and about 100 yards apart, tearing limbs off numerous people, knocking spectators and at least one runner off their feet, shattering windows and sending smoke rising over the street. 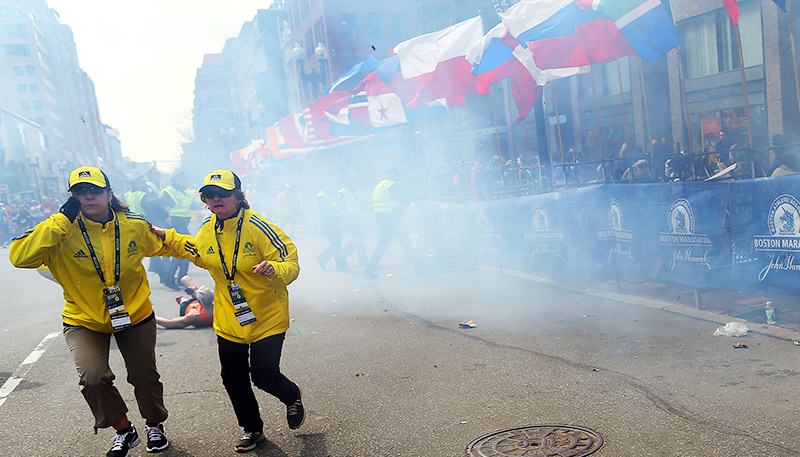 As people wailed in agony, bloody spectators were carried to a medical tent that had been set up to care for fatigued runners.

“They just started bringing people in in with no limbs,” said Tim Davey, of Richmond, Va. He said he and his wife, Lisa, tried to keep their children’s eyes shielded from the gruesome scene.

“They just kept filling up with more and more casualties,” Lisa Davey said. “Most everybody was conscious. They were very dazed.”

Some 27,000 runners took part in the 26.2-mile race, one of the world’s premier marathons and one of Boston’s biggest annual events.

After the explosions, cellphone service was shut down in the area to prevent any possible remote explosive detonations, a law enforcement official said. The official spoke on condition of anonymity because the investigation was ongoing.

Boston Police Commissioner Edward Davis asked people to stay indoors or go back to their hotel rooms and avoid crowds as bomb squads checked parcels and bags left along the race route.

The Federal Aviation Administration barred low-flying aircraft from within 3.5 miles of the site.

“There are people who are really, really bloody,” said Laura McLean, a runner from Toronto, who was in the medical tent being treated for dehydration when she was pulled out to make room for victims.

About two hours after the winners crossed the line, there was a loud explosion on the north side of Boylston Street, just before the photo bridge that marks the finish line. Another explosion could be heard a few seconds later.

The Boston Police Department said two people were killed. Hospitals reported at least 57 injured, at least eight of them critically.

A senior U.S. intelligence official said the two other explosive devices found nearby were being dismantled. The official spoke on condition of anonymity because he was not authorized to discuss the findings publicly.

Competitors and race volunteers were crying as they fled the chaos. Authorities went onto the course to carry away the injured while race stragglers were rerouted away from the smoking site.

Roupen Bastajian, a 35-year-old state trooper from Smithfield, R.I., had just finished the race when they put the heat blanket wrap on him and he heard the blasts.

“I started running toward the blast. And there were people all over the floor,” he said. “We started grabbing tourniquets and started tying legs. A lot of people amputated. … At least 25 to 30 people have at least one leg missing, or an ankle missing, or two legs missing.”

Smoke rose from the blasts, fluttering through the national flags lining the route of the world’s oldest and most prestigious marathon. TV helicopter footage showed blood staining the pavement in the popular shopping and tourist area known as the Back Bay.

Cherie Falgoust was waiting for her husband, who was running the race.

“I was expecting my husband any minute,” she said. “I don’t know what this building is … it just blew. Just a big bomb, a loud boom, and then glass everywhere. Something hit my head. I don’t know what it was. I just ducked.”

Runners who had not finished the race were diverted straight down Commonwealth Avenue and into a family meeting area, according to an emergency plan that had been in place.

The Boston Marathon honored the victims of the Newtown, Conn., shooting with a special mile marker in Monday’s race.

Boston Athletic Association president Joanne Flaminio previously said there was “special significance” to the fact that the race is 26.2 miles long and 26 people died at Sandy Hook Elementary school.