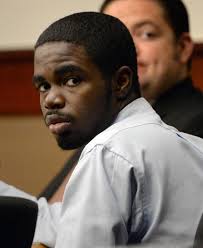 By Your Black World      A Georgia jury has convicted 18 year old De’Marquise Elkins in the fatal sho0ting of an infant. Jurors deliberated for only two hours before finding Elkins guilty of fatally sho0ting 13-month-old Antonio Santiago.

Sherry West maintains that she was walking home from the Brunswick post office with her son Antonio in a stroller when Elkins and another teen approached her and demanded money.  She testified that after she told the teens she didn’t have any money; Elkins fired his gun, hitting her in the leg and her infant son in the face.

During the trial, however, West’s grown daughter, Ashley Glassey, testified that her mother’s story didn’t add up. Asked about a conversation she had with her mother after her brother’s death, Glassey said,” The whole conversation just didn’t settle well with me.” Glassey also said that West changed her story, at first saying her son was sh0t first, then changing the sequence, saying she herself was shot first.

The most damaging evidence against Elkins was the testimony of his alleged accomplice, 15 year old Dominique Lang.

According to Lang, he ran into Elkins on the morning of the murder and they began walking together. When they saw Sherry West, who was pushing Santiago in a stroller, Elkins demanded her purse, according to Lang. When she didn’t give up the purse, Elkins threatened the baby. Then Elkin fired at West and baby Santiago.

‘The baby was in the stroller screaming,’ Lang testified.

Lang is also charged with murder and set to be tried later.