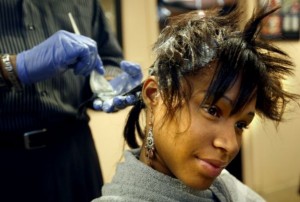 According to the latest report published in the American Journal of Epidemiology, scientists from Boston University followed more than 23,580 pre-menopausal Black women from 1997 to 2009 and discovered that the women suffered scalp lesions and burns from using hair relaxers.

The chemicals seeped all through their bodies and into their urine and as a result they acquired Uterine Leiomyomata [uterine fibroid], which are tumors that grow in the uterine.

Albeit the tumors may be benign – but that’s no consolation to the millions of Black women who have to undergo hysterectomies because their uterine has been messed up.

“Uterine Leiomyomata is associated with significant gynecologic morbidity and are the leading indication for hysterectomy in the United States,” as written in the report. “Hair relaxers can cause burns and lesions in the scalp, facilitating entry of hair relaxer constituents into the body.”

The Black Women’s Health Study reached out to subscribers of Essence Magazine and professional societies and invited them to participate in the research.

They were mailed an invitation to enroll in a long-term health study by completing a comprehensive self-administered baseline questionnaire and every two years they were asked to update exposure and medical histories.

Black women that continue to use chemical hair relaxers place their health at risk primarily because cosmetics [hair relaxers] are not regulated by the FDA and a complete list of their ingredients is not mandatory, therefore making it unclear on what types of chemicals they contain.

Some women who think they are escaping danger by using no-lye products are only deceiving themselves, because the fact of the matter remains that no-lye relaxers are advertised to cause fewer scalp lesions and burns than lye relaxers – but there is little evidence to support this claim.

Most fibroids grow within the wall of the uterus and healthcare providers place fibroids into three categories:

These tumors grow inside the uterus and are made up of muscle fibers, which can be small as a pea and can grow as large as a melon.

Eighty seven percent of women in the study reported that their condition came to clinical attention because they sought treatment for symptoms or a tumor was palpable during a routine pelvic examination.

Women who got their first menstrual period before the age of 10 were also more likely to have uterine fibroids and early menstruation may result from hair products Black girls are using, according to a separate study published in the Annals of Epidemiology last summer.

Black Women are Incarcerated by the crime of poverty

Black Women are Incarcerated by the crime of poverty […]