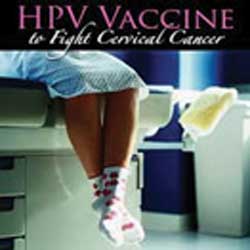 A new study finds that women diagnosed with pre-cancerous cervical conditions after they get the human papillomavirus (HPV) vaccine can still benefit from the shot because it cuts their risk of future HPV-related cervical disease.

“This study helps to clarify the effects of the HPV vaccine and further define its use,” noted one expert, Dr. Elizabeth Poynor, a gynecologic oncologist and pelvic surgeon at Lenox Hill Hospital in New York City.

Poynor, who was not involved in the new research, said it “is the first to address the effect of the HPV vaccine in women who have undergone treatment for HPV-related disease.”

The study was published online March 27 in the BMJ.

HPV remains the most common sexually transmitted infection in the United States and can cause health problems ranging from genital warts to cervical cancer, according to the U.S. Centers for Disease Control and Prevention. HPV infection is thought to be the leading cause of cervical cancer, and two HPV vaccines, Gardasil and Cervarix, have received U.S. Food and Drug Administration approval.

Previous research has shown that HPV vaccination does not prevent progression to cervical pre-cancers in women who have an HPV infection when they receive the vaccine.

However, this is the first study to examine if HPV vaccination can prevent future cervical disease in these women after they’ve been successfully treated for their current condition, the researchers pointed out in a journal news release.

The study involved an international team of researchers led by Dr. Elmar Joura of the Medical University of Vienna. The investigators analyzed data from 1,350 young women in 24 developed and developing countries who took part in two clinical trials in which they received either the HPV vaccine or an inactive placebo. The women were subsequently diagnosed with either a vulvar or vaginal disease (including genital warts) or had required cervical surgery.

“While questions remain on the design of the study, it offers another reassurance that the efficacy of the quadrivalent HPV vaccine as initial protection may extend to decreasing subsequent diseases after initial vaccination,” said Dr. Linus Chuang, director of gynecologic oncology at Mount Sinai Medical Center in New York City.

And Dr. Stephanie Blank, director of the gynecologic oncology fellowship at NYU School of Medicine, agreed that the study “describes potential further benefits of the HPV vaccine. HPV causes cervical cancer but affects even more women by causing cervical dysplasia [abnormal cell growth].” She noted that “dysplasia, which itself is only dangerous due to its association with cancer, results in multiple procedures, extensive health care costs and patient angst.”

Black Women & Cervical Cancer – The “Other” Cancer: The “OTHER” Cancer and Black women

Cervical cancer affects more than 11,000 women worldwide annually. Of the close to 2,000 Black women diagnosed with cervical cancer each year, over 40 percent will die. This is unacceptable. Cervical cancer is one of the most preventable types of cancer, and women can be screened for it with routine Pap tests. Despite this fact, the American College of Obstetricians and Gynecologists (ACOG) is now recommending women begin cervical cancer screening at age 21, instead of three years after the onset of sexual activity, as was previously recommended by the group. Cervical cancer is almost always caused by genital human papillomavirus (HPV) infection. HPV can also lead to cancers of the anus, vulva, vagina, throat and penis.

Why is this Important to Black Women?
Based on surveys conducted by the Black Women’s Health Imperative (Imperative), we found that a majority of Black women are familiar with certain facts about cervical cancer –how it is caused and that it is preventable. Yet we are still dying at a disproportionately higher rate. Although cervical cancer occurs most often in Hispanic women, Black women tend to have lower 5-year survival rates and die more often than any other race. In fact, Black women have twice the cervical cancer mortality rate compared to white women.

While the Imperative, like ACOG, encourages women to be informed about the risks and benefits of any procedure, the fact remains that most cervical cancer deaths occur among women who have never been screened or have not been screened in the past five years. While we share ACOG’s concerns on the affects of overtreatment and the social and economic toll they may place on women, particularly young women, we also know that screening and early detection are critical components in eliminating these disparate health outcomes for Black women and other women of color.

What Black Women Need to Know
Cervical cancer may be prevented through the HPV vaccine or treated if detected early by a regular Pap test. If abnormal cells caused by HPV are found while they are still pre-cancerous, they can be treated before they progress into cancer. This is why it’s important for all women to have a regular Pap test, and for women 30 and older (the group most at risk) to routinely be tested for HPV as well.

If it is detected early, cervical cancer is one of the most successfully treatable cancers which are why it is important to know and understand the risk factors for developing cervical cancer. Please refer to our Cervical Cancer & Black Women Fact Sheet, click here. Early cervical cancer generally shows no signs or symptoms. This is why regular screening is so important. A woman may develop symptoms only when the cancer has become invasive and spreads to nearby tissue. When this happens, the most common symptoms are: abnormal vaginal bleeding; unusual discharge from the vagina (separate from your normal menstrual period); bleeding following intercourse, douching, or after a pelvic exam; and pain during intercourse.
What the Imperative is doing

The Imperative supports Black women in knowing and understanding all the important facts related to this deadly but preventable cancer. Through our efforts we strive to ensure that screening and treatment guidelines are designed to meet the specific needs of Black women and that they are responsive to the trends we are seeing in cervical cancer rates among Black women.

Our work strives to achieve health equity in access, early detection and timely diagnosis and treatment by:

• Ensuring that Black women have access to timely screening and early detection services in the communities in which they reside
• Connecting Black women to the health care delivery system in order to receive important routine medical care
• Exploring what is known about cervical cancer health disparities among Black women
• Helping to identify the social determinants that contribute to the growing cervical health care disparities between Black women and others
• Applying the most promising community-driven, evidence and practice-based interventions that will achieve the greatest impact in reducing these disparities
• Increasing individual knowledge about cervical cancer
• Participating in national and community coalitions and partnerships
• Promoting screening as an essential benefit in health reform

What Black Women Can Do

New York City is Moving on Up

In December 2020, Mayor DeBlasio and the New York City Council announced more than 150 awardees of the Complete Count Fund. Each awardee received from $15,000 to $250,000 to engage in direct mobilization around the Census in their neighborhoods. The awardees and volunteers are known as Neighborhood Organizing Census Committees (NOCC). The organizations were strategically chosen to serve the most hard-to-count neighborhoods in the five boroughs. […]