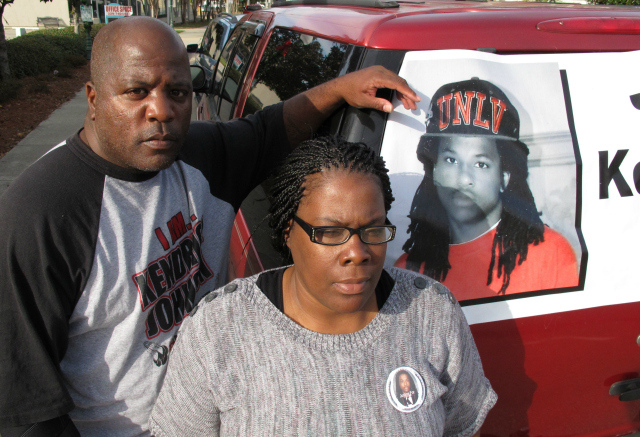 The family of Kendrick Johnson, 17, the Georgia teen found dead in a wrestling mat in his high school gym last January, has filed a lawsuit against the funeral home who was in charge of his remains, reportsCNN.

Johnson’s parents allege that Harrington Funeral Home in Valdosta, Georgia was not only negligent, but committed fraud while handling their son’s body.

As previously reported by NewsOne, state medical examiners ruled his death accidental,  but his family, finding the circumstances extremely suspicious, pushed for a second, independent autopsy and had his body exhumed. That one suggested Johnson died of blunt force trauma to the head.

Not only did the second autopsy prove that Johnson died from blunt-force trauma to the head, Dr. Bill Anderson discovered that the teen’s brain, heart, lungs, liver and other organs had been replaced with newspaper.

“I’m not sure at this point who did not return the organs to the body,” Anderson said. “But I know when we got the body, the organs were not there.”

Kendrick’s mother Jacquelyn Johnson, who was devastated that her son was “stuffed like a trash can,” vowed to continue to fight against the cover-up perpetuated by authorities in Valdosta.

“That’s my child, and we’re going to fight until it’s all over, until we get the truth,” Johnson said.

State regulators concluded  that the funeral home broke no laws when it used newspapers to stuff Johnson’s body, but his family refuses to give up.

Roy Copeland, a lawyer for Harrington Funeral Home and its owner, Antonio Harrington, said his client had not been served as of Wednesday and could not comment on something he has not seen.

In the lawsuit, filed January 31 and amended Wednesday, the family alleges that not only did the funeral home mishandle the organs, it disposed of them to thwart an investigation into Johnson’s cause of death.

It was a fraud intended to mislead and make it difficult to establish the manner and cause of death, the lawsuit alleges.

The lawsuit alleges that Harrington not only was aware that organs were missing, but “actively undertook measures to dispose of said organs in an effort to interfere” with the investigation.

As previously reported by the Associated Press, the Georgia Bureau of Investigations has said it returned the organs to Johnson’s body before sending it to the funeral home. But the funeral home has said the organs were missing when the body arrived. Lowndes County Coroner Bill Watson has said many of Johnson’s organs were deemed too badly decomposed to be preserved and had to be disposed of before the body was embalmed.