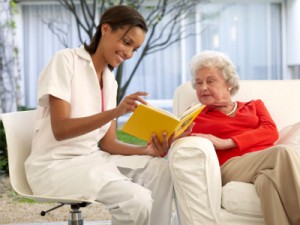 By JIM SAUNDERS THE NEWS SERVICE OF FLORIDA

THE CAPITAL, TALLAHASSEE, Sept. 19, 2012……..In what could become a class-action lawsuit, attorneys for a disabled Tallahassee woman allege that many nursing-home residents are required to turn over too much income when they enter Florida’s Medicaid program.
The lawsuit, filed last week in Leon County circuit court, stems from a longstanding requirement that Medicaid beneficiaries help pay for a portion of nursing-home care if they have income from sources such as Social Security. They are allowed to retain some money to cover expenses like health insurance and relatively minor personal needs.
But the lawsuit contends that Florida is violating federal requirements by preventing beneficiaries from keeping income to pay nursing-home bills that were wracked up before they became eligible for Medicaid.
The lawsuit, which names Tallahassee resident Gabrielle Goodwin as the plaintiff, says the state’s position has allowed the Medicaid program to pay less for nursing-home care than it otherwise should, prevented beneficiaries from having money to pay their old bills and led to nursing homes providing uncompensated care.
The state Department of Children and Families, which is a defendant in the case along with the Agency for Health Care Administration, has already rejected the arguments in an administrative case. A hearing officer last month issued an order finding that DCF acted correctly and that “federal law allows for reasonable limits to be set by each state on the amount of expenses” that can be shielded when it is determined how much income beneficiaries should chip in for their care.
Also, the order said that if past nursing-home expenses could be shielded, “Medicaid would be paying a larger share of the ongoing care in the facility due to a past period of time when petitioner was not eligible for … Medicaid.”
The lawsuit says DCF approved Goodwin’s application for Medicaid benefits in March, after she was denied last year. It says she had monthly income of $1,414, and DCF determined she needed to pay $1,032 a month to help defray costs of care — with most of the remaining amount going to health-insurance costs.
Goodwin’s attorneys, however, said in the lawsuit that DCF also should have taken into account $70,607 in unpaid expenses from her prior nursing-home care. If that would have been considered, she would not have been required to pay the $1,032 a month until the time when past nursing-home bills would be paid off.
The lawsuit seeks to become a class action, saying it could include “tens of thousands of people.”

health law that “makes sure those with pre-existing conditions can get coverage.”
[…]

Health care cover up is worse than the crime

If you read the title of this editorial you might think this column is about the Conrad Murray-Michael Jackson debacle that was front page and top story lead on almost every newspaper, magazine or broadcast news show.
[…]