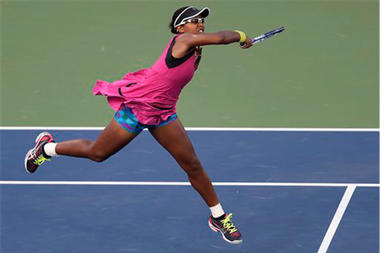 Victoria Duval isn’t a household name like the Williams sisters, but she is a workhorse.  She is also absolutely determined to make her mark on the tennis scene, pulling out a huge come-from-behind win against 2011 champion Samantha Stosur on Tuesday.   The win is the biggest upset of the 2013 US Open.

Duval’s extraordinary performance led mainstream media to ask more questions about the 17-year old phenom, who is ranked #296 in the world.

“It was a big moment, big stage, not easy closing any match out, let alone a past U.S. Open champion,” said Duval.

“I don’t even remember match point,” she said. “I guess I was really happy. I mean, you could tell by all the jumping I did.”

Duval was born in Miami and raised in Haiti until the age of 8.  She is also the winner of the USTA 18-and-under girls championships, which got her wildcard entry into the US Open main draw.

Duval says that her mentor is Billie Jean King and her father is also active in her tennis career.   She was both interesting and loveable to the media during her post-match interview.  Here is an excerpt of how things went down:

Q. We’re in the interview in Arthur Ashe Stadium.

Q. Were you aware about 20 years ago he was in a protest for the rights of Haitian refugees in Washington and was arrested at that time?

VICTORIA DUVAL: Who was?

VICTORIA DUVAL: Okay. I didn’t know that, no. That’s fantastic. Was he in this chair?

Q. I don’t think he was around when this stadium was built.

Q. He was at the US Open the day before that occurred.

VICTORIA DUVAL: Thank you. That’s a great fact right there.