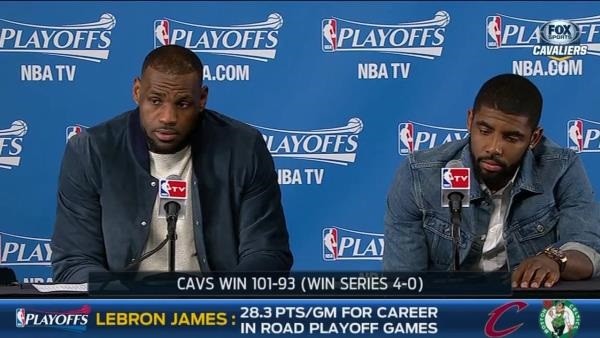 It was never supposed to be easy, and for the Cleveland Cavaliers, it just got considerably worse.

As in, Kevin Love is highly unlikely to return at all in the playoffs, according toCavs GM David Griffin.

But nothing good comes easily. Easy doesn’t enter into grown-up life. It sure has no place in the NBA playoffs. And the Cavs and their brightest star have always understood that.

James was speaking after the Cavs’ series-clinching win over Boston in Game 4 of the first round.

At the time, no one knew the severity of Love’s injury — or that guard J.R. Smith would be suspended for the first part the Eastern Conference semifinals. Both of those biting truths didn’t come to light until Monday.

Love suffered a ligament/labrum tear and bone bruise in his shoulder. He was already expected to miss at least the conference semis before Griffin weighed in on Tuesday.

Smith suffered a blow to his paycheck and will miss the first two games. That comes courtesy of the league office, which ruled that Smith used excessive force in an incident involving Celtics forward Jae Crowder.

But by now, you know all the details of the unpleasantries exchanged in the Celtics series. Now all we can do is wait to see what the Cavs plan to do about it.

Eventually, they have to play in the conference semifinals. It starts Monday, against the winner of the Chicago-Milwaukee series, to be exact.

That’s right, the Cavs will indeed still be there. They do in fact plan to show up. They do still possess home-court advantage. And they do still boast stars in James and Kyrie Irving, as well as a list of determined role players — led by Timofey Mozgov, Iman Shumpert and Tristan Thompson.

That is not the lineup the Cavs built to win a championship. But it is certainly one that can figure out a way to survive and advance.

What’s left of these Cavs, without hesitation, must believe that.

“You just control what you can control,” James said, and that is truly all the Cavs can do.

There was a time, and not long ago, when the Cavs botched and bungled their way to a 19-20 start.

Little by little, that noise began to eat its way into the team’s circle. Some of the Cavs were indeed down. But they refused to be out.

They stared down the doubts. They added some help. They dominated. They shut up everyone — the lovers, the haters, the winners and the whiners.

Now, here they are again.

They can’t beat the Bulls without Kevin Love, the basketball narrators scream. They’re finished as a team, the analysts insist.This is so Cleveland, the Clevelanders moan.

Only this time, the Cavs are prepared — for all of it. They’ve already seen it. They’ve experienced things that made them angry, things that would tear apart lesser employees in almost any profession. They have, in a word, overcome.

That should serve them well now. That should enable them to believe in something that’s even more impressive than before, to smirk at the headlines and the suddenly vocal crowd that’s jumping to bury them.

Without Love. Without Smith. The Cavs still have each other. And once again, it is about all they have.

“Those are two big pieces, obviously, but it’s next man up,” James repeated. “No excuses. You just get ready to go out and play.”

Next man up. After all, it was never supposed to be easy.