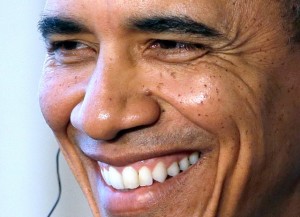 Obama says the law has not fixed the health care system but it has made it a lot better. He says there is no reason to go back, in an apparent reference to Republican efforts to repeal the law.

Obama made his remarks in the White House Rose Garden Tuesday after his administration announced the key milestone in the 4-year-old law. The total surpasses a threshold that had once been in doubt because of computer setbacks at the start of sign-ups in the fall.

THIS IS A BREAKING NEWS UPDATE. Check back soon for further information. AP’s earlier story is below.

In a key milestone for the 4-year-old health care law, the Obama administration says more than 7 million people signed up for health care through insurance exchanges, surpassing a threshold once seen as unattainable.

“The fact that the 7 million number has been reached allows us to step back and look at the sweeping, positive change that the law has ushered in to strengthen health security for every American as they go through life,” Carney said.

The number could climb. People who started applying but couldn’t finish before the deadline can have extra time, as do potential enrollees whose special circumstances kept them from meeting the deadline.

Surpassing 7 million enrollees is a major victory for Obama’s health care law. Computer glitches at the start and end of the six-month open-enrollment period had put that achievement in doubt.

The administration has not provided a demographic breakdown of the enrollment numbers and does not identify which enrollees already had insurance.

Carney argued that Republicans had run ads against the law, tried to repeal it repeatedly and their determination to do so precipitated a government shutdown last year.

“That effort could not stop this law from working,” he said.

House Minority Leader Nancy Pelosi, D-Calif., said the law’s major benefits are the level of benefits it requires insurance companies to provide and the affordability of coverage.

She said the law could still be adjusted to address shortcomings.

“As implementation takes place then you see where there could be correctives or improvements or refinements,” she said.