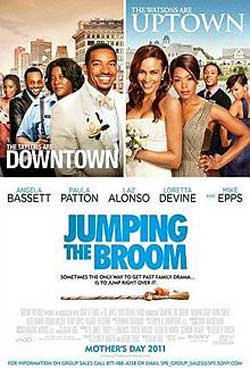 In sickness and in health. For better or for worse. And, that’s before the wedding!

http://boldmarketing.com/listing/minnehaha-falls/ http://boldmarketing.com/listing/minnehaha-falls/ Corporate lawyer Sabrina (Paula Patton, “Precious”) has slept with her share of men, and none were worth the trouble. She has a moment of clarity, and prays to the Almighty(paraphrase), “ I promise to only share my cookies (body) with my future husband, if you’ll help me find a man.” The Lord has mercy. On a fated day, behind the wheel of her auto, she literally runs into the man of her dreams, Jason (Laz Alonso,“Fast and Furious”), a Wall St. exec. He’s dazed and confused. Their eyes meet. A courtship ensues. She decrees no sex until they marry. He proposes.

http://cnt-aranjuez.org/category/conflicto-restaurante-mi-pueblo/ http://cnt-aranjuez.org/category/conflicto-restaurante-mi-pueblo/ Next thing you know, a flighty wedding planner is running around the swank Martha’s Vineyard estate of Sabrina’s bourgie mom Claudine (Angela Bassett). The planner, Sabrina and Claudine are in a flutter waiting for the arrival of the in-laws for the weekend nuptials. Jason’s mom, Pam (Loretta Devine, “The Funeral”), a post office clerk, has made the trek with her girlfriend Shondra (Latasha Smith, “Why Did I Get Married?”) and an entourage of folks from the hood.

http://bandarbaju.com/tag/grosir-dress-anak-murah http://bandarbaju.com/tag/grosir-dress-anak-murah When the matriarchs meet, it’s like a wealthy rattlesnake and a ghetto python crossed paths. If stares were daggers, and unkind words were weapons, it would have been a blood bath. When Claudine gets pissed, she rants in pretentious, affected French. When Pam goes off, she cocks her head and goes for the jugular; “I’ll break up this wedding if I have to.”

Buy Xanax Italy Buy Xanax Italy Elizabeth Hunter’s script sets up class warfare with indelible characters that grow on you like your crazy auntie or belligerent uncle at a Thanksgiving dinner. None are perfect, all are fighting demons, emotionally bruised and more than willing to go public with their private business. Some of their dilemmas seem contrived. (Is Claudine’s husband having an affair or not?). Some ring true. (A single mom is unable to let go of her adult son). Toss in a rambunctious 20-year old with a jones for an older woman, a jealous former best friend, who didn’t get picked to be the best man, and a wild spinster sister who embarrasses Claudine, and this comic romp blossoms.

Director Salim Akil honed his skill on TV series like “Soul Food” and BET’s “The Game.” His sitcom sensibility is a blessing and a curse. He deftly wrings the comedy out of the characters, situations and the dialogue. He gives the film, which fluctuates between farce and melodrama, a consistent tone. He is less skillful at making a very talky, over-written screenplay cinematic. Scenes drag and there is too much dialogue, when a gesture, a facial expression, or an action would suffice. Long scenes rob the film of a tight, consistent rhythm. However, Akil still makes the proceedings enjoyable.

Angela Bassett plays the rich witch to the hilt. Paula Patton, even though she looks a tad mature for the part, blends animated comedy and drama well. Brian Stokes Mitchell, as the suspected philandering husband, and Tasha Smith, as brassy Shondra, head a supporting cast that is charming. Laz Alonso strikes the right tone for his coming-of-age male character that cuts his mother’s apron strings and deals with a needy fiancée. He has Denzel Washington’s star quality. The incomparable Loretta Devine plays Pam with the perfect mix of evil, mischievousness and insecurity. Those eyes. That wicked smirk. She’s superb.

http://learnwithojo.com/product/magnetic-wooden-alphabet/?add-to-cart=1484 http://learnwithojo.com/product/magnetic-wooden-alphabet/?add-to-cart=1484 The film’s inspirational message among madcap activities is similar to Tyler Perry’s formula. But, it’s different in key ways: Perry’s films can turn characters into caricatures. This film does not. Perry’s films look like they’re shot on a shoestring budget. The production quality in this film is high quality: The cinematography (Anastas N. Michos) is beguiling. The set design (Doug McCullough) brims over with chic, classic Martha’s Vineyard interiors. The clothes (Martha Curry) scream Ralph Lauren. The musical score (Ed Sheamur) and soundtrack featuring Bruno Mars, Al Green and Louis Armstrong sustains scenes. This film makes you want to summer in the Vineyard and visit Oak Bluffs.

http://artists-atelier.com/wp-content/uploads/2017/11/grape-cypress600@2x.jpg http://artists-atelier.com/wp-content/uploads/2017/11/grape-cypress600@2x.jpg  Josh Marks An autopsy conducted Saturday officially ruled his death a suicide. He suffered an apparent self-inflicted gunshot wound to the head and a revolver was found near his body. Chicago police say relatives of […]