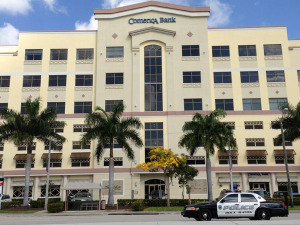 BOCA RATON (CBSMiami) – An ongoing dispute may have led a West Boca Raton man to kill his wife before taking his own life inside an accounting firm Wednesday morning.

Around 9:40 a.m., 63-year old Scott Edgerton reportedly shot and killed his wife, 56-year old Sharon Bellingham, before he turned the gun on himself.

“I called the office and they said they heard gun shots,” said Barbara who did want her last name used in this report.

The shooting happened inside the offices of CBIZ MHM. The firm, located at 1675 N Military Trail, is housed inside a multi-story building which has a number of businesses including a Comerica Bank.

The building’s valet arrived just as everyone was running from the gunfire.

“I come into the building and all the people were saying ‘run, run’ and I said ‘why’, some people have a gun,” said Antonion Hadad.

Police said the couple, who at one point had been married for a long time, had ongoing domestic problems.

“There was some type of ongoing dispute between both the suspect and the victim.  He arrived here and was able to identify where she was in the building and then went in and shot the victim,” said Boca Raton Police Chief Dan Alexander.

No one else was injured in the shooting.

The Lauderhill Fire-Rescue, Police, and Parks and Leisure Services Departments have joined together to help our residents in need during the Holiday Season.  We are currentlycollecting food and toys if you would like to help your neighbors.   […]

Michael A. Coleman shared these disturbing statistics. He is the president of Roots and Wings, a non-profit organization that teaches Black and Brown children how to read. He is also the 1st. Vice President of the Palm Beach County Democratic Black Caucus. He shares these statistics because he sees education as crucial in bridging the gap for people of color. […]