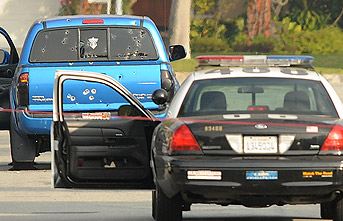 Two women were shot in questionable circumstances after the truck they were driving appeared to be similar to the vehicle driven by a former police officer who is now on the run.  One of the women was shot in the hand and the other was shot in the back.   The pickup truck they were driving was riddled with bullets as police officers thought the car was being driven by Christopher Dorner, a former LAPD officer who has been on the run from police.

The officer, threatened ”unconventional and asymmetrical warfare” against other officers whom he felt had wronged him.   After writing a manifesto on the Internet, the man is suspected of shooting three police officers, one of whom is now dead.

Some are concerned about the shooting of the two women, since it appears that the officers may not have even tried to make a peaceful arrest and weren’t necessarily in fear for their lives. The women were also unarmed.   As a result of the shooting, a 71-year old woman is in intensive care at a Los Angeles hospital and is clinging to her life.

Emma Hernandez was delivering papers for the Los Angeles Times with her daughter, Margie Carranza in Torrance when the shooting took place.   Hernandez is in stable condition.

Attorney Glen T. Jonas says that the shooting is problematic and should be cause for concern:

“The problem with the situation is it looked like the police had the goal of administering street justice and in so doing, didn’t take the time to notice that these two older, small Latina women don’t look like a large black man,” Jonas said.

Dorner is a 6-foot, 270 pound black man, which reduces the chances that officers thought that either woman looked like him before they started to fire their weapons.   The car was also not the same color or model as Dorner’s.

“We trust that the LAPD will step up and do the right thing and acknowledge that what they did was unacceptable and we’ll deal with it,” Jonas said.

LAPD is already admitting that the shooting was the result of a terrible mistake.

“Tragically, we believe this is a case of mistaken identity,” Charlie Beck, chief of the Los Angeles Police Department, told the media.