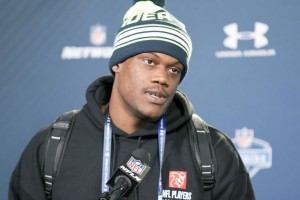 There were several draft prospects that ended up sliding down the board last night as the first roundprogressed, but nobody has seen their stock take a bigger hit at this point than former Nebraska pass rusher Randy Gregory.

At one point Gregory was being being touted a top ten pick, and despite being in Chicago waiting to hear his name called last night, Gregory will have to continue to wait. Gregory has nobody but himself to blame for his stock plummeting at this point, as he failed several drug tests and college, and he flunked the combine drug test.

Gregory isn’t pointing the finger at anyone, but himself.

“Honestly, I’m extremely disappointed. I didn’t sleep last night because I feel like I let my family down and the people who believe in me down, and I’m sorry for that,” Gregory said. “But I’m going to use that as fuel. The franchise that drafts me won’t have to worry about me off the field, but the teams that didn’t select me will have to worry about me on the field.”

Said Gregory: “I feel like I’m the best defensive player in the draft and the team that gets me is going to get a great pro. I’ve learned a lot from this experience and I hope players who come behind me learned from this too.”

Gregory’s pass-rushing skills make him one of the top-10 overall talents in the draft, according to NFL Media analyst Mike Mayock, who foresaw some three weeks ago that Gregory’s slidecould enter the second day of the draft.

I want to feel bad for the kid because I hate to see him sit there and squirm in the green room waiting for someone to pick him, but he made the decision several times open to fire up some weed and send his draft stock up in smoke.