TORKHAM, Pakistan — Ikram Khan, 12, sits at a warehouse holding a black bag full of shampoos and cosmetics that he has carried across the Pakistan-Afghanistan border — his fourth trip that day.

He is quite content to have achieved his daily earning target in a short amount of time. Khan, who is from Shalman village near Torkham, is the sole breadwinner for his family of eight.

“I carry only goods like shampoos, etc.” he said. “I do not remember my father as he was killed when I was very young. My mother tells me he was the victim of terrorism in 2016 at Khyber Agency [a center of religious extremism conflict].” 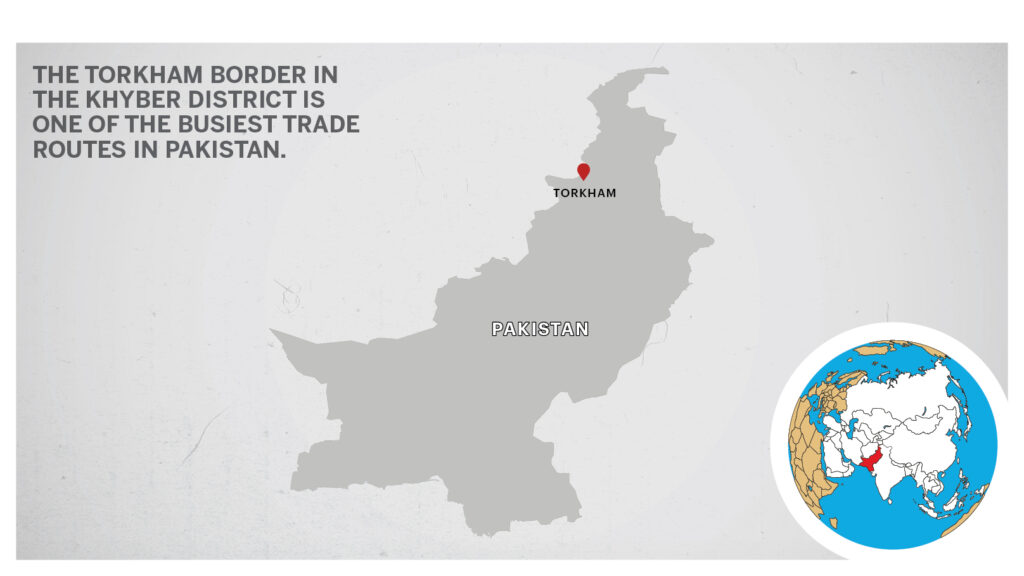 The Torkham border in the Khyber district is one of the busiest trade routes in Pakistan. Khan is just one of the many smugglers, including women, children and elderly men.

But Khan and others do not like being called smugglers. Instead, they call themselves the more nuanced “gandamar,” which is Pashto for “people who carry sacks of illegal goods.”

Musafar Bibi, 42, another smuggler sitting near the warehouse, like Khan, is also the sole earner for her family.

“I earn through smuggling cloth from Afghanistan to Pakistan and then delivering it to markets of the province,” said Bibi, a widow and mother of two daughters and three sons. “I have been doing this for almost six years and every day I put my life at risk to feed my family.”

Bibi lives in Peshawar, where she used to work as a maid in a local school.

“I left the job due to low salary,” she said. “From the maid’s salary I was not able to meet my expenses that’s why I became a gandamar to survive”

She said the life of a gandamar is full of risks and dangers every day. She wears a burqa and smuggles cloth from Afghanistan and takes it to Karkhanu market at the border of Peshawar and the Khyber tribal district.

“Last time when I was smuggling bundles of cloth to Karkhanu market from a warehouse at Torkham, one of the police personnel pushed me from the cart and tortured me, which led to the injuries,” she said, showing her swollen foot.

Bibi said that she does not have the same energy she once had.

“In the past, when I was young and had strength, I used to make 15 turns per day,” she said. “I used to bring lots of bundles in each turn, but now due to age and injury I am unable to make more than four turns per day.”

Farman Ali Shinwari, president of the labor union in Torkham and a social activist, said that carrying items such as shampoo, cosmetics, toothpaste and other harmless products across the border is not smuggling.

“Government had for some time allowed gandamars to carry sacks, but again it was banned,” he said. “It is our job, and we own this work of gandamars at Torkham terminal. That is why we do not consider it illegal as these are not harmful things to humans. How else the people of this area will earn their livings?”

He said that the underage children involved in this work on both sides of the border are mostly orphans who lost their father or guardian in the war on terror.

Typically, the gandamars smuggle goods from Afghanistan in three ways, he said: One way is by hiding in a loaded truck that crosses the border daily, with adults putting a visa in their passport in case they get caught in Afghanistan. A second way involves children joining common people who cross the border at the checkpoint. The third way, and the most dangerous, is crossing via a mountainous route where there is no police checkpoint.

Some people cross the border legally, since adults who smuggle may have a passport with a three-year visa that allows them to cross, while children crossing at the checkpoint may get a ticket for goods.

Zamer Gul, 54, is in charge of the muddy warehouse at Torkham. He is disappointed that people are facing financial hardship due to the strict government policies, including taxing goods brought into the country.

“Locals protested against the policy, after which a limited amount of goods was allowed to be taken to and from Afghanistan,” he said. “However, the policy has again been changed. These gandamars are not taking drugs [but] simply shampoos, sweets, electronics, etc. The authorities should allow them to carry stuff through the terminal. These people do not have any other source of income.”

For the most part, it is women and elderly men who smuggle bundles of cloth and electronic goods, while children smuggle shampoos, chewing gum, biscuits, cakes and chocolates across the border.

Shinwari, the labor union president, said that 5,000 men and 300 women from both sides of the border, and around 400 children, cross at the Torkham terminal.

“They cross the border many times in a day to earn few bucks,” he said. “They earn $13 per trip and one can easily manage to earn $30 per day. The maximum amount to earn per day is $60.”

Meanwhile, though smuggling continues on a daily basis, the public relations officer of the Model Customs Collectorate in Peshawar said that the department has eradicated illegal activities across the province to a large extent.

“The customs department launched an operation against smuggling and especially children being used in smuggling quite a while back and eliminated it,” said Sohail Khan.

The post Risky Path For Smugglers Struggling To Support Their Family  appeared first on Zenger News.