KOLKATA, India — An acute shortage of semiconductors is hurting the automotive industry in India at a time when car sales had started picking up after months of slowdown.

The industry had been in a slump throughout much of 2020 due to green policies, an increased Goods and Services Tax, and higher prices for passenger vehicles while the economy slowed during the pandemic.

However, passenger vehicles sales increased 13.59 percent in December over the same month in 2019, data from the Society of Indian Automobile Manufacturers (SIAM) shows. In November, year-on-year growth was 4.65 percent.

Auto manufacturers are now forced to shut factories and trim production because of the lack of semiconductors — small chips made of rare earth elements that enable innovation in the industry.

Workers at the Ford factory in Maraimalai Nagar near the southern city of Chennai had an extended holiday after the annual Pongal harvest festival Jan. 14-17 as the shortage of semiconductors kept the plant closed for nearly a week.

“We will resume production at the Chennai plant next week,” said Kapil Sharma, director of communications and corporate social responsibility at Ford India.  “This issue is affecting the entire automotive sector and is expected to cause disruptions during the first half of 2021.”

Indian auto manufacturer Mahindra and Mahindra, in a stock exchange filing on Dec. 9, said operations in the automotive sector would be affected because of disruptions in semiconductor supply from German firm Bosch, one of the largest suppliers to India.

Bosch India, in a stock exchange filing on Dec. 8, said that a “severe supply shortage” of semiconductors had limited its ability to meet the demand in India. 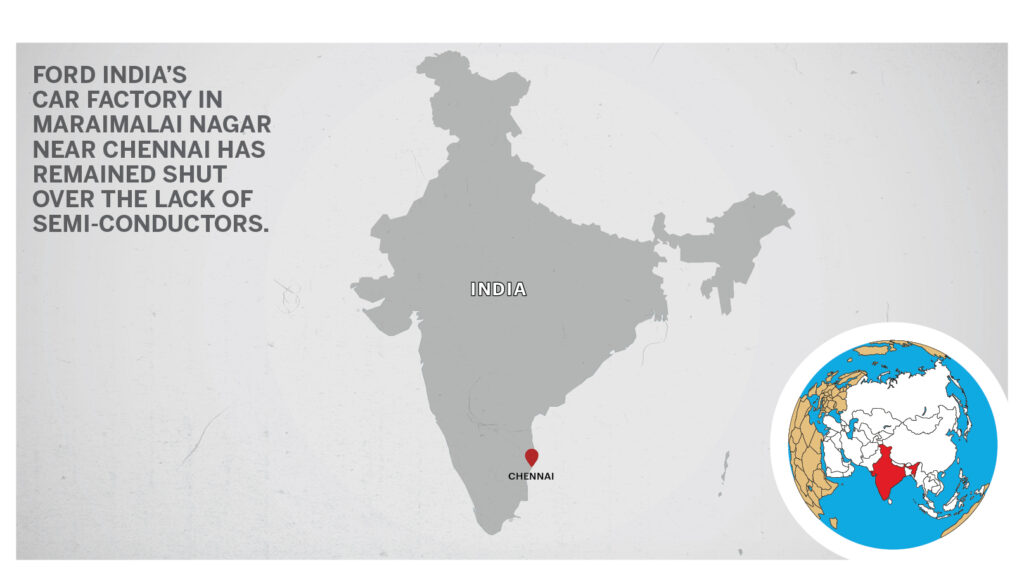 “The shortage of semiconductors has emerged as a major problem in the Indian automotive industry for the past one-and-a-half months,” said Rajesh Menon, director general of SIAM.  “Suppliers are not able to commit to meet deliveries.”

India’s total auto production fell from 441,717 unites to 40,9623 units between October and December 2020, data from automotive information platform MarkLines show.  Vehicle production by Ford India declined from 8,951 to 6943 units in the same period. The company rolled out just 431 cars in December, compared with 1,300 in October.

Mahindra and Mahindra saw total vehicle production fall from 39,439 units to 35,223 units between October and December. At the same time, Toyota’s production in India fell from 6,600 units to 3,288 units.

Meanwhile, China has cut the supply of rare earth elements, which are crucial components of semiconductors.

“It is still not clear as to what extent and for how long the shortage of semiconductors will impact vehicle production in India,” Deepak Jain, president of the Automotive Component Manufacturers Association of India, is quoted in a statement on the ACMA Twitter page. “The electronic content in vehicles is progressively increasing, and incidents such as these only precipitate the need for localization and self-reliance in auto electronics in the country.”

Supply disruptions of semiconductors have forced many carmakers globally to halt production.

Japanese automaker Honda last week told its employees in the UK that it would temporarily close its plant in Swindon due to the semiconductor shortage. Other firms that trimmed production include Volkswagen, Nissan and General Motors.

India is particularly hard hit by semiconductor shortages because of heavy dependence upon China for its imports. In the past year, India’s relationship with China has soured due to a military standoff on the border area in the Galwan Valley.

“At present, India is totally dependent on imports for semiconductor fabrication,” said Faisal Kawoosa, founder of techARC, a market research firm. “In the last decade we saw some traction to develop commercial fabs (raw silicon wafers used to manufacture semiconductors), but the enthusiasm has fizzled out. India needs to take up developing the semiconductor industry on a mission mode. The challenge is, it is a very capital intensive sector, requiring specific skill sets.”

“The country imported electronic components worth INR 1.15 trillion (nearly $16 billion) in 2019-20, out of which 37 percent came from China,” Sanjay Dhotre, minister of state for communications and electronics and information technology, said in a reply to the Rajya Sabha, the upper house of India’s parliament.

The shortage of semiconductors is due to multiple factors.

During the pandemic lockdown in the first half of 2020, there was low demand for semiconductors after the sudden halt in production.  Overall in 2020, revenue projectionof the semiconductor industry declined by $55 billion to $415.4 billion, and annual growth projection declined from 12.5 percent to 0.9 percent, a report by global consultant Accenture states. 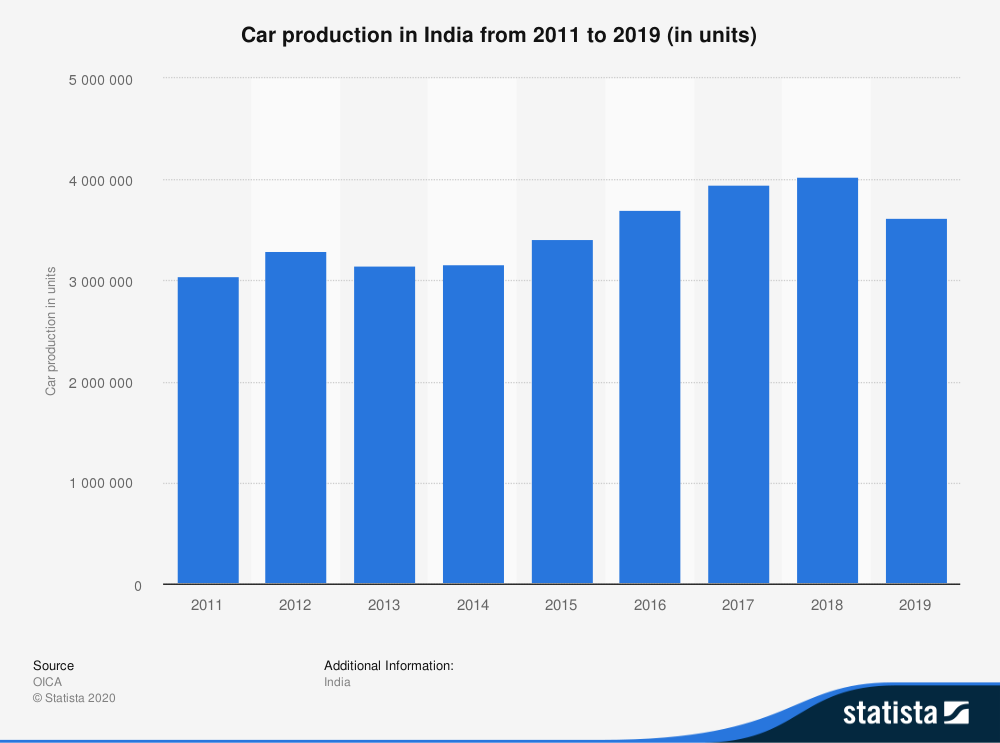 In the second half of 2020, there was a spike in demand for semiconductors due to the increased use of mobile phones, laptops and tablets as people started working from home.

“Due to the Covid-19 pandemic and the resulting decline in sales in the automotive industry, leading semiconductor manufacturers switched their production to other customer industries, such as consumer electronics,” Volkswagen is quoted in a report published by Argus Media. “In the meantime, however, the car markets have recovered significantly, especially in China.”

Since the second quarter of 2020, many automotive electronics suppliers, such as NXP, Renesas and Microchip, have announced price increases for semiconductor components, a document from Counterpoint Research states.

Despite the downturn, India is a major market for automobiles. It became the fifth-largest market in 2019, with sales of 3.81 million units. It was the seventh-largest manufacturer of commercial vehicles in 2019, according to data from the India Brand Equity Foundation.