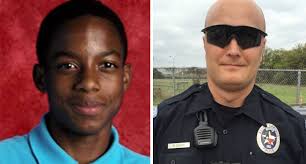 A Texas police officer who shot and killed a 15-year-old high school freshman last weekend has been charged with murder, according to news reports.

Roy Oliver, a patrol officer in the Dallas suburb of Balch Springs, has not been arrested, but a judge signed a murder warrant Friday afternoon and his bond has been set at $300,000, according to the Dallas Morning News.

Oliver, who had been with the department since July 2011, is accused of opening fire on a car full of teenagers leaving a party Saturday, killing Jordan Edwards.

Jordan was black and Oliver is white. If convicted of murder, Oliver could face life in prison.

“The warrant was issued due to evidence that suggested Mr. Oliver intended to cause serious bodily injury and commit an act clearly dangerous to human life that caused the death of an individual,” Melinda Urbina, a public information officer with the Dallas County Sheriff’s Office, said in a statement.

“The investigation into the death of Jordan Edwards will continue and does not conclude with the arrest of Roy Oliver,” the statement added.

[Police have killed nearly 200 people who were in moving vehicles since 2015, including 15-year-old Jordan Edwards]

Oliver was fired by the Balch Springs Police Department on Tuesday, three days after he responded to a call about intoxicated teens at a house party. Police say that as officers dispersed the party they heard gunshots outside. Then, when officers went outside to investigate, they saw a car backing out of a parking spot. As officers approached the vehicle, police say it began to drive away. Oliver opened fire, striking Jordan, who was riding in the passenger seat.

Jordan was taken to a hospital, where he was pronounced dead. The Dallas County Medical Examiner’s office said he was killed by a rifle wound to the head. Oliver’s arrest warrant arrives a day before Jordan’s funeral, which is scheduled for Saturday.

“After reviewing the findings I have made the decision to terminate Roy Oliver’s employment with the Balch Springs Police Department,” Police Chief Jonathan Haber told reporters Tuesday evening. “My department will continue to be responsive, transparent and accountable.”

“It has been determined that Roy Oliver, who was the second officer on the scene, violated several departmental policies,” Balch Springs Police spokesman Pedro Gonzalez said. He did not specify which policies had been violated.

[Shooting of black teen in Dallas suburb did not meet ‘our core values,’ police chief says]

Oliver has the right to appeal his termination. His attorney, Cindy Stormer, called for patience in a statement provided to the Dallas Morning News.

Lee Merritt, an attorney for Jordan’s family, said at a news conference Monday that the family is calling on the police department to release audio and video footage of the incident.

“We are declaring war on bad policing. This has happened far too often,” he said. “We are tired of making the same rhetorical demands, of having the same hashtags; our community is fed up with the same tired excuses, once again offered by Balch Springs Police Department yesterday, that this was somehow the fault of the victims — teenage kids with no criminal records, with no motive to attempt to hurt anyone, with no evidence that they ever attempted to hurt anyone.”

“Another family ripped apart by police brutality,” Merritt wrote Sunday on Twitter. “There was absolutely no justification for this murder. We demand justice!”

In a phone interview with The Washington Post on Sunday night, Merritt said that Jordan, his 16-year-old brother and three other teenage boys were at a party on Baron Drive in Balch Springs when they learned that police were on the way.

They went to the car parked outside, saw flashlights and heard gunshots, Merritt said. As they climbed into the car, the teens apparently heard somebody yell profanities. Then they were being fired upon.

They fled for about a block, Merritt said, before they noticed that there was smoke coming from Jordan’s head. The driver of the car, the boy’s older brother, stopped the car, and they flagged down an approaching police cruiser for help.

Several of the teens played on the football team together. Jordan was going through spring training for next year’s season.