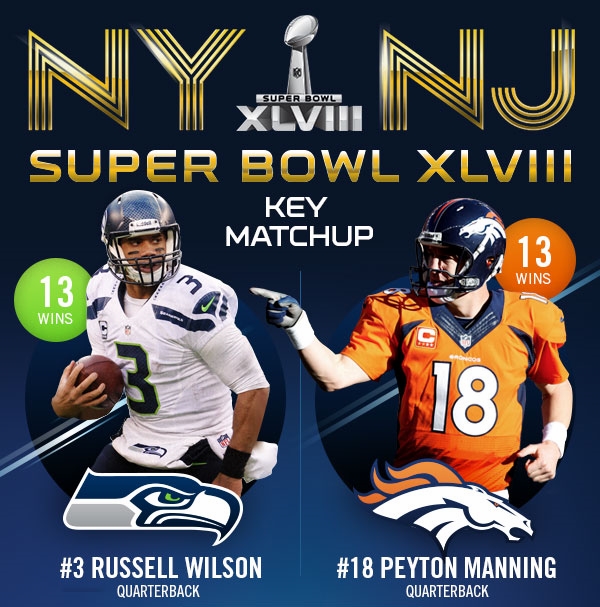 By Byler E. Henry
Sunday February 2, 2014, circle that date on your calendars. This is the day the Broncos take on the Seahawks in Metlife Stadium.
What a Super bowl this will be, both teams had an excellent record this season.
It’s going to be cold in New York. Super Bowl VI was the coldest Super Bowl so far at 39 degrees when
the Dallas Cowboys took on the Miami Dolphins at Tulane Stadium in New Orleans.
How Cold will New York get? Weather reports say a high of 49 and a low of 29 degrees Fahrenheit.  New York could set the new record, but we will have to wait and see what happens.
Before this season started I predicted the Broncos to win the AFC West and the Super Bowl against either the 49ers or Seahawks. So far my predictions were correct, and hopefully my pick wins the big one.
What a year for Peyton Manning, 55 touchdown passes to only 10 interceptions, 450 completions out of 659 attempts for 5,477 passing yards. He broke a few records this season such as passing yards in a season, passing touchdowns in a season, most two touchdown passing games, most four touchdown passing games, and tied the record with Dan Marino for most 400 yard passing games with four. Tom Brady was the previous passing touchdown record holder with 50. Drew Brees was the previous record holder for passing yards in a season with 5,476. The touchdown passing games record were both previously held by Dan Marino. I believe Payton can cap off these achievements with another championship ring. His brother Eli has two rings while father Archie doesn’t have one. However the Seahawks are not a team to be taken lightly. With a 13-3 regular season record, a good coach in Pete Carroll, a young stud named Russell Wilson at quarterback with Marshawn Lynch at running back, and an excellent defense with Richard Sherman at cornerback makes this a great matchup.
They are hungry and coming at Denver with their A game, but I believe Denver will come right back with an A+ game.
The last Super Bowl appearance for the Seahawks was Super Bowl XL which they lost to the Steelers 21 to 10, which I believe will give them a little more motivation. Peyton will also have motivation from his last Super Bowl loss against the Saints. Denver in addition has weapons on the offensive end to look out for; Demaryius and Julius Thomas, Eric Decker, and Wes Welker at receiver. Their defensive players have stepped up in the last few games. I predict Broncos win 35 to 20. The 48th annual Super Bowl will be an exciting event to watch, I’m ready for some football and can’t wait for Sunday.
Be Sociable, Share!