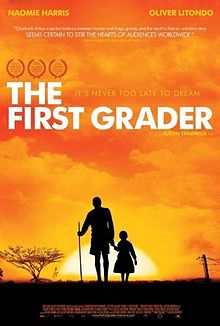 Can I Buy Xanax In Mexico

Order Alprazolam 2Mg In this fact-based story about an 84-year-old former Mau Mau warrior who desires an education, the human spirit gets tested, ageism goes on trial, tribal conflict reigns, and Kenyan history is made.

In 2002, after years of strife the Kenyan government promised a free education to all its citizens. However, in the fervor of their decree, it’s doubtful they ever expected an octogenarian, Mau Mau freedom fighter named Kimani N’gan’ga Maruge (Oliver Litondo) to take them up on their offer. And, certainly they didn’t think he would show up at the front door of a rural village primary school ready to enter the first grade and learn his ABCs.

Maruge helped liberate Kenya from brutal British rule, now he feels the system owes him and he wants an education. At first the local teacher, Jane (Naomie Harris, “Pirates of the Caribbean”), balks and turns him away. He is too old. There are 200 students, only 50 desks. Undeterred, the elder returns day after day until Jane relents. There he sits, among tiny children, like an elephant in a china shop, eager to learn yet causing tension and disruptions. The slightest provocation (an unkind word, a child’s threat) gives him flashbacks to the torture he suffered by ruthless English soldiers. Jane and the kids don’t understand his outbursts, but eventually they accept him.

http://cnt-aranjuez.org/search/김제출장서비스﻿[카톡- Po 34]『Po o34.c０M』출장맛사지출장샵추천Y╇♥2019-04-07-22-00김제♕AIJ✲출장만남출장코스가격안마└출장아가씨☆콜걸출장마사지〓김제/feed/rss2/ A nosey colleague, suspicious parents, and a narrow-minded board of education, are not as understanding. Everyday Maruge’s quest for a higher education is threatened. Will he graduate? Will he be expelled?

Can You Buy Xanax Over The Counter In Thailand

Alprazolam Where To Buy Savvy director Justin Chadwick (“The Other Boleyn Girl” and “MI-5” TV series) insisted on shooting the film in Kenya and using locals for supporting roles. As a result, the film feels simple and true. Yes, Chadwick exaggerates some situations for dramatic appeal, but this is a feature film, not a documentary and artistic license is a smart weapon. His theatrical flourishes — testy school board meetings, Jane’s banishment to another school – pique anger and determination. Scary flashback sequences – Maruge faces torture – are chilling and sad. Tender moments — Maruge befriends a school bully – touch the heart. More than 99 engaging minutes, the film provokes a full range of emotions.

Brand Xanax 2Mg Online As Jane, Harris shows just enough determination and grit to make her character a trouper. Litondo’s interpretation of the cantankerous elder haunted by the price he paid to free Kenya, plays the part like a saintly shaman. The kids seem natural, and even more convincing than the adult supporting cast.

b6b97ab591db7f2bb33925c4bca500c9 Kenya should hire cinematographer Rob Hardy to shoot its tourism campaign; his footage makes its rugged countryside look inviting. The screenplay by Ann Peacock embellishes and underscores an inspiring tale that is passionate and steeped in history.

If this were a Hollywood movie focused on an elderly gentleman striving for justice, it would probably turn him into a buffoon stripped of dignity and a victim of lame old age jokes. In this director’s hands, this appealing mixture of contention and inspiration becomes a feel-good story that will make you shed a tear, then grin ear to ear.