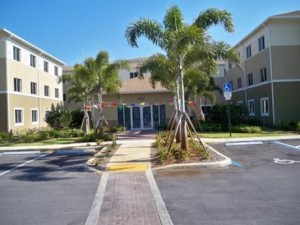 ”The Young and the Restless”….The Dixie Court Story

The approval process and decision on who would become residents of Dixie Court was made by the City Commissioners who themselves was the Housing Authority. The tenant screening and policies remained in force throughout the 40s and 50s for those families who obtained initial residence. Additionally, the apartments/units were inspected sporadically to insure that they were being kept in good condition.

By some measure, the nurturing environment that had been created by the Housing Authority, had been entrusted to the residents for contributing their part.

Public housing was not designed for the “Poorest of the poor” but for a select segment of the working class. This working class that became residents at Dixie Court consisted of barbers, storekeepers, beauticians, porters, waiters, domestics, cashiers, bookkeepers and various other occupations defined in the category of labor. The educational levels of the parents were generally less than high school, with only a few having obtained a high school diploma. It was these parents who instilled in their children their first “taste and appetite” for learning. It was their daily mantra that a good education was the only way to gain access to a better life which is what they also sought.

The children, young and restless, learned in school and in the community, good moral habits, discipline, respect, and manners. It was a time that adults and children had the utmost respect for teachers, coaches, band leaders, and others in the school community, as well as ministers and other community leaders, who helped to mold the lives of their children. Some say it without meaning, but for those of us who really know and understand, Dixie Court was indeed a “village” raising its children.

“Children will be children” is a statement that is easily related to mischief and naughty behavior. However, it is a well known fact that the adults in Dixie Court assumed the responsibility of their own, as well as children in other families. Misbehavior was summarily and expeditiously dealt with by any adult with a double-whammy usually inevitable when the parent returned to hear the news. Through it all, the children who grew up in Dixie Court in the 40s and 50s took their ambitions seriously as they moved through academia in high school and beyond; professionals, semiprofessionals, skilled, corporate, and the gamut of the working world. If Dixie Court was indeed the “Jewel of the Community”, then it must have been the family children of the forties and fifties who made that gem sparkle. Third of Series – “The Submerged Middle Class”