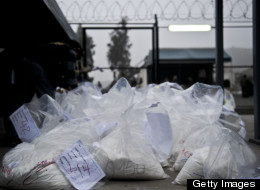 Even as their governments fighting it, Western businesses are benefiting from the Latin American drug trade.

More than 97 percent of the total street value of cocaine produced in Colombia — that’s billions of dollars — ends up in the hands of criminal groups in the U.S. and other first-world drug consuming countries, according to a study by two economists at the University of the Andes cited by the Guardian, and that money is laundered through banks. The study’s authors allege that Western financial regulators are hesitant to go after western banks for profiting off the drug trade.

The study highlights the tension between one set of countries — those that are leading the drug war charge, profiting off it the most and consuming many of the drugs produced — and another set of countries that are producing the drugs and getting hardest by the violence of the drug war. In one example of the tense relationship, the top three candidates for the Mexican presidency all said last month that they would shift the country’s drug strategy to focus more on reducing violence in Mexico and less on preventing drugs from entering the U.S., according to The New York Times.

The University of Andes study isn’t the first report of U.S. or European-based banks laundering money for illegal drug trafficking operations, though. Wachovia Bank was found to have laundered billions of dollars of illegal drug money into the U.S. on behalf of a Mexican drug syndicate, according to various reports.

In addition, the head of the United Nations Office on Drugs and Crime told the Guardian in 2009 that profits from organized crime were “the only liquid investment capital,” available to big banks that had been teetering on collapse the year before.

In addition, drug money may have even rescued some of the banks.