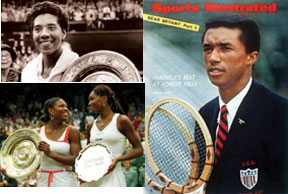 The American Tennis Association (ATA), the oldest Black sports organization in the U.S., is preparing for celebration of its landmark 100th anniversary in 2016 in alliance with the Greater Fort Lauderdale Convention and Visitors Bureau (GFLCVB).

For 100 years the ATA has provided a social network for amateur players and training and experience for young talent before turning pro. The organization has produced some of the country’s top Black tennis talent on the court and as celebrated coaches, while also opening the door for contemporary young Black stars such as Serena and Venus Williams.

Throughout its 100-year history, the ATA has been closely aligned with prominent African American Greek organizations. Pioneer Althea Gibson who broke racial barriers in the sport, was a Soror of Alpha Kappa Alpha. Arthur Ashe, Grand Slam winner and Wimbledon and U.S. Open Champion, was a member of Kappa Alpha Psi. The relationship is continuing into the second 100 years. The CVB and the ATA have engaged the National Pan-Hellenic Council in a tennis tourism initiative supported by local chapters. African American Greek sororities and fraternities in the U.S are pledging support for the ATA’s youth development programs and the plan for a permanent home in Greater Fort Lauderdale, a center for training and for preservation of the history of Blacks in tennis.

The 100th anniversary will be celebrated at the 99th National Championships in Fort Lauderdale July 31-Aug. 7, 2016. The annual competition, started a year after the ATA’s founding, has become a signature event in the area, heralded as a Black Tennis Summer Family Reunion event promoting fun and togetherness. The tournaments and special activities for adults and youth will draw thousands of tennis players and enthusiasts from major cities around the U.S. and the Caribbean.