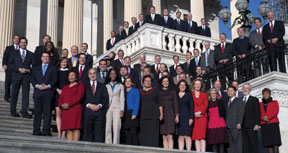 114th Congress welcomes more women, African Americans than ever before

Still, Congressional law-makers are predominantly white and male. However, the addition of 104 women is remarkable. African Americans of both genders representing both parties will be walking the halls of Congress.

Congress will see 96 racial minorities this term, which is roughly 18 percent. Just as an FYI: There are 100 Senators and 435 seats in the House.

In the House, there will be 188 Democrats and 246 Republicans. Michael Grimm, (R-N.Y) has resigned, leaving one seat vacant. In the Senate, there are 44 Democrats and 54 Republicans. There are two independents– Bernie Sanders (Vermont) and Angus King (Maine).

Eighty-four women will serve in the House. The two women to take notice of are Elise Stefanik and Mia Love. Stefanik is a 30-year-old Republican from New York. She is the youngest woman elected to the House. Love, a 38-year-old African American woman from Utah, is the first Black female Republican to win a seat in Congress.

Forty-four African Americans— including William Hurd, a Black Republican from Texas— will serve in the House. According to news reports, Hurd recently made news for being named chairman of an Information Technology sub-committee on the House Oversight and Government Reform Committee. This is an unusual distinction for a freshman.

Democrat Mazie Hirono of Hawaii is the only Asian-American in the Senate.

While some may revere the diversity in Congress as a step in the right direction to serve women’s interests as well as African Americans’ interests, the Asian population in the US may be proof of just how little national politics plays on a demographics’ ability to excel. The Asian segment of the population, which only makes up five percent of the nation, statistically has the most successful businesses, the highest median income, and are the most educated.

Interestingly enough though, they have the lowest voter turnouts in the nation. How do they do it? One can presume it’s due to economic unity. The dollar circulates in Asian communities for a month. By comparison, the dollar only circulates in Black communities for six hours. There are lessons to be learned from the Asian population.

Dr. Sinclair Grey III is an activist, speaker, writer, author, life coach, and host of The Sinclair Grey Show heard on Mondays at 2 p.m. on WAEC Love 860am (iHeart Radio and Tune In). Contact him on www.sinclairgrey.org or Twitter @drsinclairgrey

The Balm In Gilead is appealing to ALL congregations of every faith and background to host an HIV Testing Event at some point during the month of June, in support of National HIV Testing Day […]