Bobby Henry has been nothing but kind to me, especially considering that, up until today I’ve never met the man in person. But when he asked me to introduce him I knew I was ill-equipped.

You see, all I knew about him was good stuff; he’s a community champion, he would give you the shirt off his back, he is a passionate advocate, a spiritual person, blah blah blah…

But I was asked to introduce Bobby to newspaper folks at the NNPA Conference. Newspaper folks, want depth, they hunger for the untold story.

Everybody understands that Bobby Henry has got to be awesome to receive this award, but what about his DARK SIDE???

I needed to find some dirt to balance out this squeaky clean picture. So I went digging, and where better to find the truth about a man than from his lifelong friends?

They were all effusive with praise, until one friend … we’ll call him “DD”, offered this story from Bobby’s life:

Bobby was a teenager, driving down I-95 with his friend, DD. That particular section of the highway was under construction so Bobby was dutifully doing the speed limit.  Well some hot rod driver got impatient and cut him off.

The way I heard it, the guy didn’t stop at that, but kept trying to run Bobby off the road! Well, Bobby’s blood started to boil and he stepped on the gas. He didn’t stop until they reached a narrow bend in the construction where all cars had to slow to a crawl.

He pulled alongside the guy and forced him to pull over. Then he got out the vehicle. He walked over to point out to the man he had never seen before that he could have gotten them all killed.

Traffic slowly streamed through the narrow bend while Bobby tried to reason with the young man. But, the burly, well-built young construction worker puffed out his chest, dropped into a karate stance and came at young Bobby, swinging.

Apparently Bobby Henry never backs down from a fight, so fight he did. He knocked the young man down, but he got up. So Bobby knocked him down again. The fool kept getting up so Bobby yelled to DD, “Get the camera! Take some pictures while I’m teaching this boy a lesson!”

The young fool kept getting up, Bobby kept knocking him down, and Mr. DD kept snapping pictures!

Traffic slowed to a crawl as folks slowed down even more to watch the whipping.

When the young man finally had the sense to stay down, Bobby hauled him up to his feet. Bobby offered his hand and the chastened young martial artist took it. They shook hands, got back into their vehicles and proceeded down I-95 at a safe speed.

Bobby Henry is all the good things folks say, but don’t tick him off, because he’ll rise to the challenge, and he’ll have the pictures to prove it when he beats you. 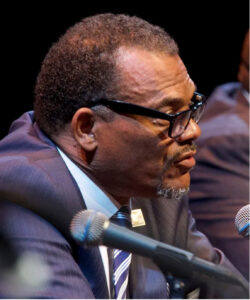 Henry’s activism motivates him to become involved in impoverished communities through ministry. It is not uncommon to see Henry and several of his friends in these blighted areas of their city in prayer circles on the street, sometimes with known drug dealers or mothers praying for their children.

Henry attended Bethune-Cookman College before transferring to study journalism at Florida A&M University where he was a member of the famed Marching 100 Band. He later moved closer to home to attend Florida Memorial College. After graduation, he went to work at the family-owned Westside Gazette, in Fort Lauderdale, Florida, continuing the legacy his father began in 1971. In response to negative media coverage and the refusal of the local daily paper to print a retraction, businessman Levi Henry secured advertisers to publish his own paper.

Besides being appointed by then-Governor Jeb Bush to sit on The Florida Black Business Investment Board, Mr. Henry has been active on the boards of numerous organizations, including the Negro Chamber of Commerce and the NNPA. He is also an active participant with the Fort Lauderdale Branch of the NAACP (life member), New Mount Olive Baptist Church (deacon), McDonald Lodge #70 A.F.&A.M. and his fraternity, Omega Psi Phi Fraternity, Inc. (life member). He is the current president of The Florida Association of Black Owned Media, Inc.

Henry will be presented the NNPA 2022 Publisher Lifetime Achievement Award during the 2022 NNPA Midwinter Training Conference, which takes place January 19-22, 2021. 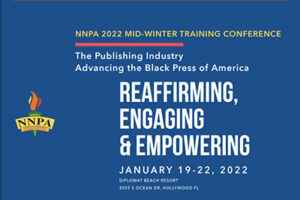 However, in light of the increasing spread and severity of the Omicron COVID-19 variant, the National Office conducted a survey among our board members, regional presidents and member publishers to determine whether it is prudent to continue with the 2022 Midwinter Training Conference in Hollywood, Florida as scheduled.

The results of our efforts indicate that a majority of our membership express serious concern regarding the potential health risks for attendees, given that this will be an in-person event that will require some travel. Therefore, we have decided to postpone the in-person aspects of the Conference until later in the year when, hopefully, there will be a significant decline in virus spread.

While we have made every effort to ensure that all health and safety precautions will be in place at the venue, we have also consulted with public health and other officials at the federal, state and local levels.

Unfortunately, the daily increases in the rates of infection and hospitalization continue. As we all know, this virus has an even greater adverse impact on communities of color.

In lieu of the change in scheduling for the in-person event, we are coordinating production of online virtual/digital presentations to support our member publishers. These will include presentations from NNPA’s corporate partners and sponsors.

The NNPA office will be in touch with each of you with respect to other issues that will arise as a result of today’s decision. We made this decision out of an abundance of caution and concern for the health and well-being of each of you, your families, businesses and the communities in which we serve.

Thank you for your understanding and support.  May God continue to bless you.

Man graduates with doctorate degree despite being bullied, suspended and having learning disabilities

The life of Dr. Isaiah L. White, Sr. is a remarkable story of grit, determination, and perseverance. As a young student, he was bullied and had to deal with teachers who told him he would be nothing. He also had multiple learning disabilities like dyslexia and spent most of his schooling in special education. Despite all of this, he still managed to recently graduate with a Doctorate degree from Wilmington University in New Castle, Delaware. […]

Henry was educated in Seminole County Schools and he was known throughout the community for his academic achievements. […]

My name is Richard K. Dunn, Sr., founder  of Men2Boys Mentoring Program, a Non-Profit 501(C)3 Tax Exempt Organization. Men2Boys has been operating in Broward County Florida since April 2010. Our mission is to provide adult male Mentoring (i.e. Group Mentoring and “Teen Coaching”) to boys and young males in our community and the surrounding area. To encourage, empower and equip; to educate, energize and elevate young males to make responsible choices, smart decisions, recognize their passions and discover their purpose […]