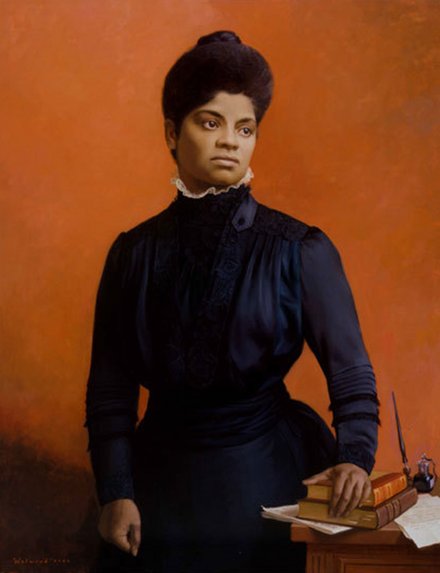 Seventy-one years before Rosa Parks refused to give up her seat on a Montgomery bus, Ida B. Wells bought a first-class ticket for the ladies’ compartment on the Chesapeake & Ohio Railroad. When the conductor tried to force her to move to the African-American car, a struggle ensued, during which she allegedly bit the guy’s hand. She fought, she sued, and she won, though Tennessee’s supreme court reversed the opinion on appeal.

It was only one of the daring events in Wells’s astonishing life. She was born 153 years ago today in Holly Springs, Mississippi, to enslaved parents, six months before the Emancipation Proclamation. Her father, a master carpenter and Republican activist, was on the board of Shaw University, and Wells attended that school until a family crisis forced her to leave. (She had also mouthed off to the college president, and conflicting reports contend that she was expelled.)

She was by turns a teacher, a journalist, a newspaper owner, and a lecturer. Her fiery opinions, statements like “the white man’s victory soon became complete by fraud, violence, intimidation, and murder,” did not exactly endear her to the Southern (or, for that matter, Northern) establishment.

When a friend of hers and two other men were lynched in Memphis, she began an investigation into the systematic practice of lynchings, and published her finding in a 1892 pamphlet, Southern Horrors: Lynch Law in All Its Phases. “Brave men do not gather by thousands to torture and murder a single individual,” she later said, “so gagged and bound he cannot make even feeble resistance or defense.”

Wells traveled to Europe twice for anti-lynching speaking tours. She was in the forefront of the struggle for women’s suffrage. When she married Ferdinand Barnett in 1895, she was one of the first American women to keep her own last name as well as her husband’s. Until her death in 1931, at the age of 68, she fought with incredible bravery and valor at a time when the merest whisper of speaking truth to power could get you killed. But for Wells and thousands of other activists like her, a few famous, so many others unsung, there was really no choice. “I felt that one had better die fighting against injustice,” she once said, “than to die like a dog or a rat in a trap.”

I hope all is well with you.   I would love to gauge your interest regarding four African-American mothers that raised over $8,000 for their children’s school through the Box Tops for Education program.   […]

We ring the bell for freedom, democracy, and majority rule. We sound the clarion call for freedom fighters as we urge Floridians to reach out to Mr. Ben Frazier and the Northside Coalition and pledge support to a campaign to make Governor Ron DeSantis accountable. We also ask lovers of freedom to call the offices of Senators Marco Rubio and Rick Scott and demand they vote for the John Lewis Voting Rights Act and the Freedom to Vote Act. These three public servants who have become “three blind mice” to equality for all, must be made accountable now. […]