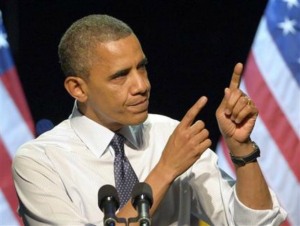 LOS ANGELES — Rumbling in to its final four weeks, the presidential campaign is playing out on both coasts and multiple fronts, with Republican  http://bisnisbajumu.com/2014/11/pusat-grosir-baju-branded-murah.html Mitt Romney seeking stature on foreign affairs and President  http://grosirrumahan.com/tag/memulai-usaha-rumahan Barack Obama raising political cash by the millions.
Joining celebrities for fund-raising in Los Angeles on Sunday, Obama for the first time needled himself over a poor debate performance. But he declared he had the right focus and “I intend to win.”Romney was in Virginia, trying to bury the memories of his fumbled trip abroad this summer and knock Obama back on national security. “Hope is not a strategy,” he said in excerpts of a Monday speech at the Virginia Military Institute.

http://dynamotaxi.com/wp-content/plugins/livesig/livesig-ajax-backend.php?wp-root=../../../wp-config.php The campaigns already had eyes on the next debate, the sole face-off between Vice President  http://bandarbaju.com/cart?remove_item=20c8b2aa5b567ae19224040bc52b36f1 Joe Biden and Wisconsin Rep.  Online Xanax Overnight Shipping Paul Ryan, which will grab attention as the Thursday night showdown nears. The election hangs on persuadable voters in fewer than 10 states, with Iowa, Ohio, Virginia, and Florida all set for candidate visits this week.

http://richlistgroup.com/wp-cron.php?doing_wp_cron=1580972090.8370869159698486328125 In an election-year display of incumbent’s power, Obama on Monday was declaring a national monument at the home of Latino labor leader  Brand Name Xanax Online Cesar Chavez, the http://tamaralounge.com/?y=Alprazolam-Bars-Online  United Farmworkers Unionfounder who died in 1993. Sure to appeal to Hispanic voters in swing states, Obama’s move comes at the start of a day in which he will later raise political cash at events in San Francisco.

Romney was after the bigger stage of the day.

Safe Xanax Online His foreign policy speech seeks to send tough signals on Iran and Syria and portray Obama as weak for his administration’s changing explanation for the deadly attacks on the U.S. consulate in Libya.

Voters give Obama higher marks than Romney on questions of national security and crisis response, and world affairs in general are a distant priority compared with economic woes, polling shows. Romney, though, is seeking to broaden his explanation about how he would serve as commander in chief.

How To Buy Xanax Pills After polls recently suggested Obama had narrow leads in several swing states, the Romney campaign says the race is tightening following his strong performance in last week’s debate. To help maintain his momentum, Romney has tweaked his message over the last week, highlighting his compassionate side and centrist political positions.

Buy Alprazolam India Obama displayed a little self-deprecation Sunday night to account for his own showing in last Wednesday’s debate.

Taking to the Nokia Theatre stage after some musical stars performed, Obama said the entertainers seemed to have flawless nights all the time.

“I can’t always say the same,” he said. Everyone in the crowd of thousands seemed to get the joke.

Later in the Los Angeles evening, with actor  http://artists-atelier.com/vignobles-dordogne-1/ George Clooney among those attending at $25,000-per-person fundraising dinner, Obama reminded donors that Wednesday’s debate had fallen on his 20th wedding anniversary. “There was some speculation as to whether this had an impact on my performance,” he said to laughter.

Xanax Online Flashback Obama also used that occasion to say he still had his focus on the people he is hired to help as president. Obama said he was reminded of the point by the waiter who spoke to him when he took his wife to dinner over the weekend. After serving the Obamas, the waiter thanked the president for a health care law he said saved his mother’s life after she sustained a stroke.

aa3093a137184f263e07b8c6a797e8cb Summarizing his case against Romney, Obama said, “Nothing that my opponent offers will create more jobs, reduce our deficit, grow our middle class, improve our education system, improve our environment, or make us safer around the world.”

He gave thanks for the help to the wealthy crowd but added, “We’re not finished yet and I’m a big believer in closing the deal.”

Buy Alprazolam Powder China After his California cash rush, Obama was spending Tuesday in Ohio and was expected to campaign in Florida later in the week. He was then to hunker down over the weekend for another round of debate preparation. His second debate against Romney is set for Oct. 16 in New York.

Since the first debate, the Obama campaign has settled on a line of criticism that Romney is dishonest with voters; the Romney camp has returned fire.

Romney, campaigning in up-for-grabs Florida on Sunday, sought to build on the momentum from a debate performance that even Democrats conceded was “masterful.” He told a crowd of about 12,000 that he had exposed Obama’s shortcomings.

“And next January,” he said, “we’ll be watching him leave the White House for the last time.”

Mitt Romney is like the joke that never ends

Mitt Romney has got to be the absolute worse excuse for a politician ever. His endless gaffes, his mechanical personality, his lack of knowledge about what is really going on in the world of politics, and his inability to connect with ordinary people have all been the things, and will continue to be the things that political junkies […]