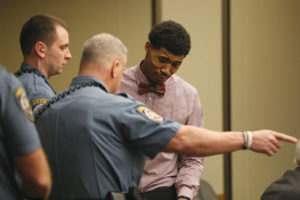 The verdict in the case of Albert N. Wilson, and the all-white jury is gaining national attention

A former student at the University of Kansas has been sentenced to 12 years in prison and a lifetime of probation for a September 2016 incident involving another underage student.

Albert N. Wilson attended a bar with a friend and met a girl who was visiting a family member who attended KU. The two were both under 21 at the time and intoxicated when they left the bar to go back to Wilson’s apartment.

According to the Lawrence Journal-World, Wilson was 20 years old and the woman was 17. Both parties agree they met at the popular college spot Jayhawk Cafe while heading to the dance floor. Wilson allegedly lifted the girl’s skirt and touched her while they kissed. Subsequently, Wilson invited the girl back to his place, which was near the bar. Neither party reportedly asked each other their ages.

The victim claimed Wilson took her back to his place where he raped her. While he admits in engaging in other sexual acts, Wilson claims the two never had sexual intercourse.

Kansas Bureau of Investigation scientists testified that Wilson’s DNA was found on the girl’s chest via Wilson’s saliva when he kissed her, but no DNA from seminal fluid was found. Swabs were collected from the girl the day after the incident from a nurse at a local hospital.

During the trial, Wilson, who is Black, initially said he didn’t remember all of the details of the night, but implied that police were against him from the get-go because of his race.

“I don’t know how to explain this, but I come from a different background than you, ma’am,” said Wilson to Judge Sally Pokorny, who is white. “… I just felt like the police [were] against me at that point.”

After a six-hour de-liberation, the all-white jury convicted Wilson of rape. Wilson was subsequently given the reported lowest end of what’s called for by Kansas sentencing guidelines for rape.

National attention grew after the verdict was handed out. Questions started to arise about the young woman’s story, particularly because surveillance footage shows the two were only at Wilson’s apartment for five minutes before returning to the bar. Twitter was in an uproar.