It matters not  what is going on around us. One of the most stunning and quickest way to get anyone’s attention is to mentioned that someone has just been introduced to death. We can spend a lifetime trying to understand the inevitable; however, it takes a lifetime to meet death. No matter a person’s fame and fortune or social status or rank in the military. Whether they are on the starting team or come off the bench to play, death is a part of the game of life and God is the Greatest Referee because He starts and ends life. Coach Eddie Fraser was a young man with plenty of promise and one who touched many lives because he made them winners. Coach Frasier got himself together and answered the final game whistle from the Greatest Referee of all times. Rest In Peace, Coach Eddie Frasier. 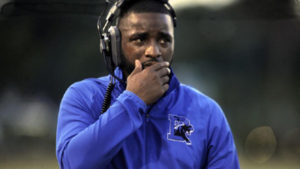 Great coaches are an invaluable gift that our creator uses to unlock what is bound up in others that which they may not be able to see.  It is the task of bridge-building and being a travel agent to take others to destinations that they cannot see.  This gift is as obvious and basic in great coaches as other fundamental character traits. You perceive it immediately, once in their presence, a sort of magnetic effect of personality. Coaches are chosen by the creator.  They are not made in coaching academies or conventions.

The best way to understand great coaching is to look at and examine the needs of the student-athlete.  A great coach innately understands the calling of the ones he serves and there is no need for an acclimation period for the athletes that are now assigned under their care.

I knew Eddie Frasier as a student-athlete when I had the pleasure to coach on the staff at Dillard where he played. The one thing that stands out to me as a coach observing a player is that one could see his desire through his efforts.  It was like looking at motivation in a bottle, and he possessed the ability to open it and be infectious to the people around him.  He led his team in victory and carried them in defeat.  For that alone it was a pleasure being in the company of a giant amongst men.

As a coach, it was my esteemed pleasure to watch from a distance as he resurrected a Dillard High school program and placed it back in the forefront of Broward County and the state of Florida high school athletics.

Week after week we all watched in amazement, which later became expected success as he courageously led our Panthers in and out of battle.

Many will grieve, many that will be changed forever, a community that has lost its strongest supporter.

However, I now challenge the living to finish the race that Eddie began.

As Langston Hughes stated in one of his great poems, “What happens to a dream deferred?”  we have a choice that must be made as it is essential to not let this young soldier’s memory and goals dry up like a raisin in the sun.

The late great coach of Ohio State Woody Hayes had a saying, `You need to pay forward and thank the people who got you where you are.’” Well, I will venture to say that Coach Frasier paid it forward for all of Panther  Nation.

The charismatic and ever so eloquent, witty, fiery and most intelligent and articulate, The Honorable Congressman Alcee Hastings, left an indelible reminder of what our purpose should be in championing the cause of the poor, least privileged and the young.   […]

Pray, Praise, and Proclaim what His will: will be

In times like these we questioned everything that happens good bad or in-different. We can’t seem to find the answers to justify what we consider to be the means to what is happening. We run rampant searching for answers to appease us to suppress the anxieties that we feel because of our human frailties. […]

Welcoming the National Newspaper Publishers Association to Fort Lauderdale has reinforced and confirmed my beliefs to the need for the survival of the Black Press. As we stand on the precipice of a new beginning for the disseminating of information to Black people, about Black people, telling our own story and writing the narrative for us. For the record, let us not forget the path from which we came. […]