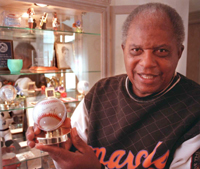 Bob Mitchell, who recently passed away in Tampa, fought Major League Baseball for years to make sure Negro Leaguers could get a pension.

TAMPA — The world for-gets, but Bob Mitchell never did.

Jackie Robinson’s arrival in Brooklyn in 1947 may have changed the way Major League Baseball looked to outsiders, but it did not change the reality for many African American players in the game. Many remained ignored, marginalized and stuck in baseball’s backlands even as the world assumed the color line had become a relic of bygone days.

Yet by 1954, the year Mitchell made his Negro League debut, half the teams in Major League Baseball still had not integrated.

And it took another 50 years, and Mitchell’s noble persistence, before MLB fin-ally acknowledged its complicity and debt to players still toiling in the post-1947 Negro Leagues by providing them a pension.

If this is farewell, then FSU’s Mike Martin has left a legacy to remember.

Mitchell, who moved to Tampa from his native West Palm Beach 25 years ago, died on June 12 at age 86.

“He was never bitter about baseball, but he had an in-your-face personality and he was not afraid to talk to Major League Baseball and tell them they were wrong,” said his wife, Wanda. “He had some regrets about his base-ball days because he figured he was just as good as a lot of players in the majors.

“But he was never going to be the Jackie Robinson type. Baseball didn’t want angry Black men in their game. He and Branch Rickey would have never gotten along.”

Looking back, Bob “Peach Head” Mitchell was an un-likely choice for a reformer in boardrooms and politics. In the early 1950s, he was just a young righthander looking to make a living throwing a baseball.

Starting with the Florida Cubans out of Lakeland and later joining the Kansas City Monarchs — with legendary manager Buck O’Neil and pitcher Satchel Paige — Mitchell pitched three seasons in the Negro Leagues before giving up to start a family with his fiancee. He ended up working nearly 30 years in a machine shop for Pratt & Whitney in Palm Beach County.

It was only after he retired, and realized the financial plight of so many other former Negro League players, that Mitchell began lobbying MLB officials about setting up a retirement fund.

Baseball had previously created a pension for players who had been a part of the Negro Leagues before Robinson’s MLB debut in 1947, but Mitchell argued that Black players were still largely ignored throughout the 1950s. He routinely wrote letters to then-commissioner Bud Selig and others and eventually enlisted the help of U.S. Sen. Bill Nelson.

“Bob wrote a letter to me and made me aware of how Negro League players had been unfairly treated, and we ended up meeting and I eventually made a number of speeches about this,” Nelson said. “We kept getting the run-around from baseball until, all of the sudden, Selig was set to appear before Congress to talk about doping issues in sports.

“I was going to have a chance to interrogate him in front of the Washington press corps and the world and, all of the sudden, they decided to do something for the Negro League players.

“Call it discrimination or racism or whatever you like, but the quota system in baseball prevented a lot of Black players from having a legitimate opportunity to reach the majors in the 1950s,” said Bob Kendrick, president of the Negro Leagues Baseball Museum in Kansas City. “You can’t help but appreciate Bob Mitchell and others who advocated on behalf of a lot of Negro League players, and also Major League Baseball’s willingness to finally act on this issue.

“Bob did not have a lengthy career in the Negro Leagues but his role has been felt, and continues to be felt, by many of these players who count on those pensions.”

Even if baseball hadn’t al-ways been kind to him, Mitchell never turned his back on the game. A few months ago, his son, Marc, was perched in front of the TV, playing a baseball video game.

Bob started inquiring about the game and discovered Marc could create an entire team modeled after players from the Negro Leagues in the 1950s.

Nearly 70 years later, Bob Mitchell was back on a ball-field, if only in the virtual reality world of a PlayStation and a TV.

“Almost every day for the past 2-3 months, we would play a doubleheader,” Marc said. “He had me create all the players he remembered and would tell me all of the attributes each player had. He was really into it. We had a lot of fun.”