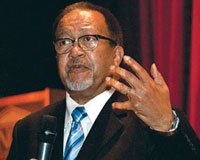 I once asked the first African American billionaire, Reginald F. Lewis, what single word best defined the most determinative factor that led to his monumental financial success? Mr. Lewis answered, “Preparation.” To accept or to meet the challenges of life, one must first be prepared.

Attaining a quality education is one of the best methods for self-development and self-preparation. The long history of African American progress is inextricably linked to our access and attainment of a good education.

From Frederick Douglas to W.E.B. Du Bois to Booker T. Washington, the goal of education for Black people was paramount to achieving freedom, justice and equality in America and throughout the world. Today, in 2017, that goal is still a top priority for 47 million African Americans across the nation.

It is important to recall lessons from our history to continue the struggle against the forces of racism, oppression and economic inequality. Shortly after the slave insurrection led by Nat Turner in southern Virginia in 1831, the states of Virginia, North Carolina, South Carolina, Georgia, Alabama and Mississippi all passed laws making it a felony to teach a Black person how to read and write.

Educating and preparing Africans in America to meet life’s challenges was once against the law. It was illegal to educate our people in those states. It was against the law in the South for Black people to be educated before the Civil War in America. My great, great, great grandfather, the Reverend John Chavis, defied those terrible laws in 1838 and was beaten to death, as a result.

This subject is personal, but not limited just to my family’s legacy. While those laws no longer exist, the issues of education for millions of African Americans are still essential and life-advancing. Thus, it is important to assert and to rearticulate the critical importance of supporting Historically Black Colleges and Universities (HBCUs).

I proudly serve on the Board of Directors of the National Association for Equality Opportunity in Higher Education (NAFEO) that represents all of the HBCUs and PBIs (Predominantly Black Institutions. There is no question that these educational institutions continue, with academic excellence, to provide the majority of Black college graduates in science, technology, engineering, the arts and mathematics (STEAM).

At a recent national conference of the Thurgood Marshall College Fund (TMCF) in Washington, D.C., Koch Industries reaffirmed its contribution of more than $26 million to the TMCF. The support of HBCUs cuts across the partisan political divide in America. The fact is Koch Industries “accepted the challenge” and stepped up to the plate and gave an unprecedented a-mount of financial support to both the United Negro College Fund ($25 million) and to the TMCF.

Accepting the challenge of providing more funding for the higher education of Black Americans should not be reduced to partisan politics. This is about improving the quality of life for Black America and for all communities who yearn for freedom and equality.

As a graduate of Howard University, I know that HBCUs deserve the support of corporate America. Let’s hope that other corporate leaders will also accept the challenge of financially supporting HBCUs.

Black lives should matter to Black killers, too

Black lives should matter to Black killers, too
[…]

Thank Edward for that car

Thank Edward for that car
[…]