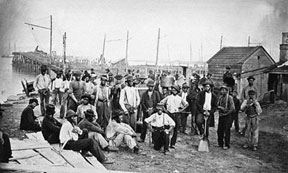 Millions of African Americans will soon be able to trace their families through the era of slavery, some to the countries from which their ancestors were snatched, thanks to a new and free online service that is digitizing a huge cache of federal records for the first time.

Handwritten records collecting information on newly freed slaves that were compiled just after the civil war will be available for easy searches through a new website, it was announced on Friday.

The records belong to the Freedmen’s Bureau, an administrative body created by Congress in 1865 to assist slaves in 15 states and the District of Columbia transition into free citizenship.

Before that time, slaves were legally regarded as property in the US and their names were not officially documented. They often appeared only as dash marks – even on their owners’ records.

African Americans trying to trace family history today regularly hit the research equivalent of a brick wall prior to 1870, when Black people were included in the US census for the first time.

Now a major project run by several organizations is beginning to digitise the 1.5 million handwritten records from the Freedmen’s Bureau, which feature more than four million names and are held by various federal bodies, for full online access.

All the records are expected to be online by late 2016, to coincide with the opening of the new Smithsonian National Museum of African American History and Culture on the National Mall in Washington.

Hollis Gentry, a genealogy specialist at the Smithsonian, said at the announcement of the project in Los Angeles on Friday: “The records serve as a bridge to slavery and freedom. You can look at some of the original documents that were created at the time when these people were living. They are the earliest records detailing people who were formerly enslaved. We get a sense of their voice, their dreams.”

Gentry also said it could help people now find living relatives on their family tree, as well as records of forebears.

“I predict we’ll see millions of living people find living relatives they never knew existed. That will be a tremendous blessing and a wonderful, healing experience,” Gentry said.

The Freedmen’s Bureau made records that include marriages and church and financial details as well as full names, dates of birth and histories of slave ownership.

They have been available for access by the public in Washington, but only in person by searching through hundreds of pages of handwritten documents.

The project to put the documents online is a collaboration involving the Smithsonian, the National Archives, the Afro-American Historical and Genealogical Society, the California African American Museum and FamilySearch. The last-named body is a large online genealogy organization run by the Church of Jesus Christ of Latter-Day Saints – otherwise known as the Mormon church, based in Salt Lake City.

Volunteers will help to digitise the handwritten records and they will be added to the website as they become available. The website is discoverfreedmen.org.

The announcement was made by FamilySearch and some of the project partners in Los Angeles on Friday, the 150th anniversary of “Juneteenth”, the oldest known celebration of the ending of slavery which commemorates 19 June 1865, the day when it is believed that the last slaves held in US ownership were told of their emancipation.

Sharon Leslie Morgan, founder of Our Black Ancestry Foundation, an organization that provides research for African American genealogical research, said the indexing was important for history and for today.

“In order for us to deal with contemporary issues that we have today – racism, Black boys being shot down in the streets – you have to confront the past,” she told USA Today.

“The land was stolen from the Native Americans. The labour was provided for free by African slaves. The entire foundation of American capitalism is based on slavery, on a free labour market. People don’t want to deal with that, and you have to.”

I join in solidarity with the 11-year- old girl known as Little Miss Flint who told you that spending $5 billion to make water safe is a much better way to protect Americans than building the wall. […]