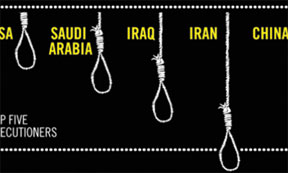 America, China and Saudi Arabia among the few remaining countries that executed anyone in 2013

Only 22 nations that are not currently experiencing military conflicts carried out executions in 2013, according to a report by Amnesty International. Moreover, while the United States — with 39 executions in 2013 — ranks fifth overall in total executions, the death penalty is an increasingly regional affair within our nation’s borders. Only nine states, Alabama, Arizona, Florida, Georgia, Ohio, Oklahoma, Missouri, Texas and Virginia executed a person in 2013. Notably, Texas killed 16 of those 39 people, which is more than 40 percent of the total number of American executions.

China, which is believed to have carried out thousands of executions, is the world leader in these state-sponsored killings. Specific data regarding China’s execution rate is considered a state secret, however, so the exact number of people killed by the People’s Republic of China is uncertain.

In most of the world, the death penalty is very much on the wane. Notably, Russia has a moratorium on executions and has not executed anyone since 1999, and Russian President Vladamir Putin questioned the efficacy of the death penalty as recently as last April. Meaning that, on this one hum-an rights issue, Texas Gov. Rick Perry (R) actually lags behind Putin.

The argument that the death penalty actually deters crime is doubtful at best. According to Dartmouth University statistician John Lamperti, “an overwhelming majority among America’s leading criminologists [have concluded that] that capital punishment does not contribute to lower rates of homicide.” U.S. states without the death penalty have murder rates that are consistently lower than those in states that do impose death sentences — although this could be attributable to socioeconomic factors unrelated to criminal law.

This article was published at NationofChange at: http://www.nationofchange.org/america-china-and-saudi-arabia-among-few-remaining-countries-executed-anyone-2013-1396273616.

Thank you, America, for not pissing off the dark and discernible with your penchant for poor decision making. I’m sure it’s been super fun for the pundits earning their keep by pretending that Mitt Romneymight’ve successfully […]

Jay-Z The Power of Our Voice Barack Obama

Obama for America today released “The Power of Our Voice,” a new web video featuring hip hop artist, entrepreneur and longtime supporter of President Obama, Jay-Z.  In the video, Jay-Z talks about the importance of voting and using […]

America: “What Will You Do unto the Least of These?”