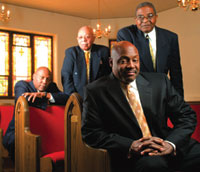 An array of multicultural organizations fighting against what they describe as “Christian persecution” around the world is finding it difficult to win broad public support for the issue. That is especially true in the Black church, where politics, policy, and the perceived agendas of those sending the message, have dampened the ability of Black advocates to sell the issue as a major concern to both leaders and the community at large.

What there seems to be no question about is the reality of the problem.

Organizations such as Human Rights Watch and Open Doors USA have identified more than 25 countries where treatment of Christians could be described as “persecution” in a full range of actions from harassment and aggressive intolerance to genocide, including Nigeria, Syria, and Egypt, among others.

According to Pew Research, more than 75% of the world’s population lives in areas with “severe religious restriction.”

Simply because of the size and scope of the Christian church, many of those restrictions are likely to be against Christians

In 2016, then Secretary of State John Kerry declared killings by ISIS in Mosul as acts of aggression specifically based on religion, saying in an official speech, “We know that in areas under its control, [ISIS has made a systematic effort to destroy the cultural heritage of ancient communities—destroying Armenian, Syrian Orthodox, and Roman Catholic churches; blowing up monasteries and the tombs of prophets; desecrating cemeteries,” said Kerry.

But while a significant coalition of faith and political leaders have rallied to the cause, the vast majority of those most vocal about the issue have been members of the Christian right, or the conservative wings of denominations otherwise considered liberal.

That has led to skepticism among some that efforts to protect Christian refugees and Christians in Muslim states are tied to conservative political calls for travel bans based on religion, selective deportation of immigrants and broader policies considered to be anti-Muslim.

No major Black-led denomination has been part of the discussion until recently, when Rev. Anthony Evans, of the National Black Church Initiative, which claims 34,000 Black and Latino churches as its constituency announced its decision to join the effort.

Evans explained the ideological split as something historically common among church groups “The leadership of the denominations are well educated as to the issue of persecution, but they have never made this an issue. That’s a problem in the greater black and white religious communities in general.”

He places part of the blame on how the war on terror has shaped the conversation.

Most recently, the Middle Eastern nation of Qatar has been a particular focus of rights organizations, both for accusations of state-sponsored terrorism and lack of tolerance for the practice of Christianity. Yet the focus on terror, and the strategic importance of Qatar to the US military has clouded issues of religion.

“A terrorist act may happen and the focus becomes the event. That often overshadows the fact that an attack may be against Christians, because they are Christians. It makes it hard to shape the narrative because sometimes the government has a separate agenda, “Evans said.

Most recently, the focus of The problem shares the stage with similar attacks against ethnic and religious communities outside the Christian faith, and across a broad spectrum of circumstances.

The National Black Church Initiative hopes to move the issue of persecution beyond church leadership to parishioners and the Black community at large by connecting incidents of violence against Christians abroad to similar incidents closer to home.

Evans said, “We don’t necessarily have to look across continents.  After the church shooting in Charleston, it became clear that Christians are a target. That is a powerful modern example. The shooter hated the Christian church. And what is one the most venerable and vocal symbols of Christianity in America? The Black church.”

But he acknowledges that bringing new coalitions together will not be an easy task, given a wide range other priorities.  “It’s about education and outreach. It begins with personal testimonies, which are powerful in the faith. Right now it’s not an issue at the top of the food chain, then again I have not been a part of it before,” said Evans.