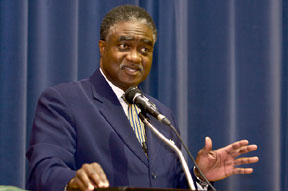 An 11-hour Infomercial for Hillary Clinton

Instead of a weakened opponent, Clinton emerged stronger than ever in the wake of Vice President Joe Biden announcing he will not make a third run for the White House. Time after time, she demonstrated her mastery of foreign policy, proved that she could remain calm under constant badgering and inane questioning by Republicans on the panel. Clinton couldn’t have created a more effective TV campaign commercial.

I watched all of the charade except for a 30-minute break I took to watch national news. By the time the hearing wrapped up, the only thing new we had learned was that there are no limits on how low Republicans will sink to score political points – at a cost of nearly $5 million and counting.

Instead of seeking answers to questions, more often than not, the GOP panel members would tell us what they thought the former Secretary of State was thinking at the time or shared their far-fetched “theory” about what was transpiring at the time.

Rep. Elijah Cummings (D-Md.), the ranking member of the panel, said the special committee had one goal – to damage the presidential candidacy of former Secretary of State Hillary Clinton.

“As we all know, Representative Kevin McCarthy, Speaker Boehner’s second in command and the chairman’s close friend, admitted that they established the select committee to drive down Secretary Clinton’s poll numbers. Democrats didn’t say that. The second in command in the House said that, a Republican,” Cummings stated.

“Republican Congressman Richard Hanna said the Select Committee was, quote, ‘designed – designed to go after Secretary Clinton.’ And one of the chairman’s own, hand-picked investigators, a self- proclaimed conservative Republican, charged that he was fired in part for not going along with these plans to, quote, ‘hyper-focus on Hillary Clinton.'”

Rep. Jim Jordan, a Republican from Ohio, offered: “Here’s what I think’s going on…”

Peter Roskam, a Republican from Illinois, said: “…And let me tell you a little bit of a theory that I’ve developed from my reading and research and listening today…”

Perhaps they relied so heavily on theory and their personal opinion because there were no new facts to add.

In fact, they went over many of the same questions Clinton had answered when she testified before the committee earlier.

“Of the 316 total questions, according to our count Republican members of the committee asked 249,” Media Matters, the media watchdog group, found. “About 75 of their questions – 30 percent – involved information that was already specifically discussed during Clinton’s first day of hearings in front of Congress in January 2013.

“Those hearings (she appeared twice on the same day before both the Senate Foreign Relations Committee and the House Foreign Affairs Committee) only lasted a total of about five hours and 35 minutes, but Clinton and her questioners managed to provide a plethora of information that yesterday’s Select Committee was apparently unaware existed.”

It continued, “For instance, Clinton had already answered questions about who handled requests for increased security at Benghazi prior to the 2012 attacks. She had already answered questions about why, in the days following the attacks, she had – like the intelligence community and eyewitnesses on the ground – discussed the anti-Muslim video that sparked worldwide protests and which the alleged terrorists themselves cited as a motivation. And she had already explained that the compound in Benghazi was a ‘temporary’ facility, and thus not under the normal regulations for more typical consulates and embassies.”

When Republicans callously tried to portray Clinton as uncaring after the loss of four Americans, she responded with passion and sensitivity.

The hearing was roundly denounced by the media as fruitless.

The New York Times observed, “The pointless grilling of Mrs. Clinton, who fielded a barrage of questions that have long been answered and settled, served only to embarrass the Republican lawmakers who have spent millions of dollars on a political crusade.”

A Washington Post editorial said, “The House Select Committee on Benghazi further discredited itself on Thursday as its Republican members attempted to fuel largely insubstantial suspicions about Hillary Clinton’s role in the 2012 Benghazi attacks. Grilling Ms. Clinton all day, they elicited little new information and offered little hope that their inquiry would find anything significant that seven previous investigations didn’t.”

Cummings said, “When we first joined the Select Committee, I asked my staff to put together a complete report and database setting forth the questions that have been asked about the attacks and all of the answers that were provided in the eight previous investigations…The problem is that rather than accepting these facts, Republicans continue to spin new conspiracy theories that are just as outlandish and inaccurate.”

George E. Curry is President and CEO of George Curry Media, LLC. He is the former editor-in-chief of Emerge magazine and the National Newspaper Publishers Association News Service (NNPA). He is a keynote speaker, moderator, and media coach. Curry can be reached through his Web site, georgecurry.com. You can also follow him at twitter.com/currygeorge, George E. Curry Fan Page on Facebook, and Periscope. See previous columns at http://www.georgecurry.com/columns.

“It’s not easy being Black and male in America. Despite historic gains made in the last 50 years, Black males from all walks of life continue to face challenges and hardships that have created significant disparities in the areas that are most critical to ensuring that our boys have equal opportunities to develop the skills required to become successful men,” said Rep. Wilson in a statement on May 13. […]

Time for justice for children in New York

Time for justice for children in New York
[…]

What we can learn from the Black Panther Party today

What we can learn from the Black Panther Party today