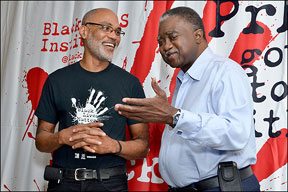 DURBAN, South Africa — On my first night here to cover the 26th International AIDS Conference, I had dinner with Phill Wilson, president and CEO of the Black AIDS Institute (BAI), and three other members of our delegation. During the course of our wide-ranging conversation, Phill mentioned the unusual circumstances under which we had met in 2003.

At the time, I was serving the first of two tours as editor-in-chief of the National Newspaper Publishers Association News Service (NNPA) and had written a column expressing my deeply conflicted feelings about same-sex marriage.

Predictably, the response to my column was quick and furious. I received 200 scorching e-mails and I subsequently published excerpts from some of them in my weekly column without further commentary.

Rather than join the chorus of bashers, however, Phill Wilson telephoned me and requested a meeting. I immediately agreed and he flew from Los Angeles to Washington, D.C., and met with me at my office in the Howard University School of Communications.

Interestingly, neither of us tried to change the other’s mind. Phill expressed his view, which differed from mine, and I elaborated on my quandary of not feeling gays and lesbians should be discriminated against because of their sexual orientation but explaining that my opposition to same-sex marriage was rooted in my religious upbringing. I emphasized that there are millions of people like me who are not the least bit interested in gay-bashing, but are genuinely conflicted over this issue.

More important than whether either of us changed our position was that when the meeting was over, Phill had enlightened me how AIDS was ravishing our community. I was struck by the across-the-board disparities, including among teenagers and straight women, and was embarrassed that I was unaware of the depth of the crisis in our community.

Because of that visit in which Phill shared so much eye-opening data, I developed a heightened interest in covering the disease, an interest—and friendship with Phill—that has only grown stronger in subsequent years.

More than anyone, Phill Wilson has been the Paul Revere of Black America when it comes to sounding the alarm about the devastation HIV/AIDS has visited upon African Americans. He is a tireless champion determined to curb the impact of this disease and does unmatched work as president and CEO of the Black AIDS Institute, the only national HIV/AIDS thnk tank focused exclusively on Black people. I later found out that not only had Phill contacted me, he also reached out to major civil rights leaders, urging them to tackle what he described as a “Black disease.”

As Phill will tell you, I have repeatedly pressed him to expand his efforts to recruit more straight Black men and women to engage in the fight against HIV/AIDS. I understand the disproportionate toll the disease has taken on gay and bi-sexual Black men, but thanks to him, I also realize how many other groups are affected.

According to the Centers for Disease Control (CDC), 87 percent of Black women become infected through heterosexual sex and only a small percentage through injection drug use.

Yet, I saw few outreach efforts at the International AIDS Conference here aimed at heterosexual males or females.

On the other hand, there were sessions titled, “Working with Communities of Faith to Reduce TB and HIV Stigma” and “Turning the Tide: Outreach and Social Support for Trans Sex Workers.”

This was another missed opportunity.

And in our predicament, we can’t afford to miss any opportunities to make inroads into curbing this disease. The CDC figures tell why:

I understand that gay and bisexual men deserve special attention because of the lopsided numbers. But this is not a battle for them to fight alone.

There are many straight people who would add their voice to the fight against HIV/AIDS. But it may take a Phill Wilson to sit down with them and say, as Phill told me, we may never agree on certain social issues, but it is not necessary to be in agreement on every issue in order to combat the HIV/AIDS epidemic in Black America.

As education, jobs, and the national and global economy go digital, people without broadband (high-speed Internet) access risk being left behind. This disparity in who’s online and who isn’t is often called the digital divide – and Blacks and Latinos are more likely to be in the latter group. […]