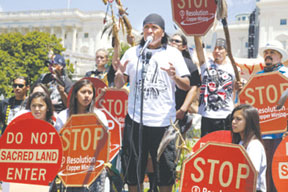 Wendler Nosie, chairman of the San Carlos Apache Tribe, gathers the people who rode a caravan from Arizona to the District of Columbia to save Oak Flat, a sacred burial ground on July 22. (Nancy Shia/The Washington Informer)

By Barrington M. Salmon, Special to the NNPA from the Washington Informer

When San Carlos Apache Tribal Council member Wendsler Nosie found out late last year that Arizona Sen. John McCain had tucked a rider into the National Defense Authorization Act that transfers 2,500 acres of Apache land to a foreign copper company, anger and resolve bubbled up inside in him, he said.

McCain’s actions, he said, represents the latest chapter of generations of theft, disrespect and contempt by the federal government toward Native Americans.

In response, Nosie helped organize a series of protests on San Carlos tribal land in South-eastern Arizona, and he and 300 demonstrators traveled 2,200 miles in a convoy that traveled from Arizona through Colorado, Minnesota, Illinois and New York to the nation’s capital, where they made their voices heard at the steps of the U.S. Capitol on July 22.

Their mantra: “Save Oak Flat.”

“We’ve been fighting this since I was born,” Nosie said. “What they’ve been doing is providing exemptions from federal laws on national environmental impact. What brings us here is this exemption for Resolution Copper. McCain attached as a rider to the National Defense Authorization Act at night in the dark at 11 p.m. That’s how sneaky and tricky he is. McCain stole our land from us. But we’re like a boxer. We may get knocked down, but we’ll always get up.”

“We’re here for a number of reasons. We support repeal and will answer all questions. We’re here representing all tribes.”

McCain released a statement disputing tribal assertions that the land is sacred, and he and others in Arizona’s congressional delegation add that the land swap will spur jobs and economic security for thousands of people living where the mine will operate. Oak Flat sits on a substantial amount of copper, and Resolution Copper plans a $6.2 billion mining project that Native Americans, opponents and others argue will decimate tribal sacred areas and deprive members of the San Carlos Apache tribe and the Yavapai-Apache nation of their traditional, religious and ceremonial practices.

Oak Flat is being exchanged for 5,200 acres of land privately owned by the company.

Nosie said he and other opponents have been fighting against different versions of the land swap bill since 2002. All failed until McCain tucked the rider into the must-pass bill.

Before the rally, demonstrators marched from the White House to the Capitol, where for about three hours they invoked the spirits of their ancestors, sang, drummed and participated in solemn but vibrant prayer ceremonies. Speakers young and old spoke of the moral and spiritual imperative of fighting to regain their land.

Tribal Elder Sandra Rambler echoed that resolve, saying she would do whatever was necessary to fight back against those seeking to steal Native American lands.

“(While we traveled), we ate crackers, drank water, ate sausages and fruits that people donated. “It’s not about money. It’s about what’s in here, especially the youth,” she said pointing to her heart. “My great-grandmother’s buried at Oak Flat. I will stand before the bulldozers. Do you think I’m intimidated? Do you think (Reps. Paul) Gosar, (Jeff) Flake or McCain intimidate me?”

DNC partners with the NNPA to reach Black voters

Our own worst enemy