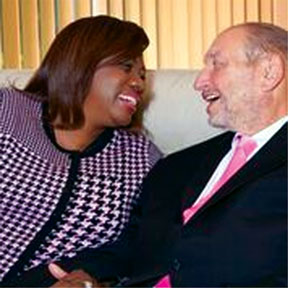 At home with the Formans

Howard Forman is retiring in December.  “I am calling it quits for now, but who knows what I will do next,” says Ho-ward.

The couple, who reside in Davie, says they have a lot to be thankful for, including improved health.

“When I met Howard, he was battling several serious illnesses. His diet was off and he was not eating properly and taking care of himself.” Mrs. Forman continues, “After changing his diet and insisting that he eliminated some of the bad carbs and sugary treats from his diet, he has lost more than 70 pounds and is enjoying a better quality of life.”

With a wide grin Brenda explains, “We have our date nights and we have managed to maintain a wonderful friendship with mutual respect for one another.”

Born in Troy, Ala., Brenda Forman was raised by her grandmother. “My Mother died when I was 10 years old and it was devastating of course. My grandmother stepped right in and raised us with Christian values and a belief that you could do anything you want to do if you put God first. We went to church often, and were taught to respect others and to do the right thing, no matter what.”

Brenda says she decided to run for her husband’s seat after much prayer. She really believes in her heart this is what she is supposed to do.

“I believe those teachings have prepared me for overcoming many obstacles and for such a time as this. I’m operating on faith,” Brenda says.

“Howard has managed to successfully run the Clerk’s office for many years. It is a well-run machine, with many loyal and devoted employees; I’m looking forward to continuing his legacy.  My time as an employee at the Clerk’s office has equipped me with the skills and the know-how to run the office.”

Brenda says her campaign to replace her husband as Broward Clerk of Court has had its obstacles. “The people that we thought would support us with campaign contributions did not happen. They made promises but did not come through, it was disheartening, but I have managed to press on. I get out and knock on doors and try to meet as many people as I can. I was recently endorsed by Broward County’s Black Elected Officials and the Concerned Clergy of Broward County, which is a true honor.

“I am asking the voters of Broward County to remember me at the polls. I am out there, and I’m believing for a good showing in next week’s election. I am qualified to serve the residents of Broward County as their next Clerk of Court. I am the only candidate with the experience of actually working in the Clerk’s office and I am looking forward to working with the staff to make the necessary changes to improve the services that are offered by the Clerk’s office. I want to travel the county, to inform the citizens about the services that we offer.”

Some of the improvements that she would implement are: longer hours for residents to pay their fines and get information, and broader technology to improve the overall functions of the Clerk’s office.

“I am so proud of my wife, she has campaigned tirelessly and is out in the community seven days a week, and she never complains. She wants to win so that she can continue my legacy and to improve the services to benefit the com-munity.”

If she is successful in her race, Brenda Forman will be the first woman and the first African American to hold the position of Broward’s Clerk of Court.