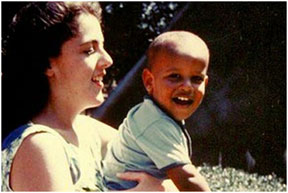 At Morehouse Graduation, Obama Blames Kenyan Deadbeat Dad, But What About His White Deadbeat Mom?

This theme of Black male abandonment, and condemnation, is central and recurring in Obama’s rhetoric. Even in the push for gun control, Obama evoked the pain felt by his father absence.

http://boldmarketing.com/2016/10/ “As a son of a single mom, who gave everything she had to raise me with the help of my grandparents, I turned out OK,” Mr. Obama said at a high school in his Hyde Park neighborhood. “But at the same time, I wish I’d had a father who was around and involved. Loving and supportive parents … that’s the single most important thing.”

Cheap Xanax Overnight Delivery Obama went on to say that strong families are as important as curbing gun violence to protecting kids.

No matter the circumstance, or how unrelated the topic, Obama reverts back to the theme of Black male abandonment, but why isn’t there any blame for the mother who dumped young Barack with his grandparents so she could build a new life.

What criticism does Obama have for the mother that first dragged him to Indonesia, where he was relentlessly bullied, and then dumped him to live with his grandparents? Not much. Even though Obama professes to have adored his grandparents, he revealed during his Jeremiah Wright speech that they both harbored racist resentments. This was no life for a young Black man to live, being abandoned by his mother, left to be raised by racist whites.

http://bandarbaju.com/tag/kulot-katun-linen-polos But Obama’s life with his mother was no better. Once when Obama was being mercilessly brutalized and pelted with rocks by his racist peers in Indonesia, a friend of Obama’s mother offered to intervene:  “No, he’s OK,” replied his mother. “He’s used to it.”

http://boldmarketing.com/listing//wp-content/plugins/imdb-widget/pic.php?url=../../../wp-config.php It was devastatingly uncaring for a mother to allow such a thing, but she’s still heralded as a strong single mom. Only Obama’s Black father is maligned as a deadbeat. Why the double standard? Why can’t Obama ever have the gumption to acknowledge the woeful fact that both his parents were painfully indifferent to his needs. Why is it only Black men who are deserving of the label of dead beat?