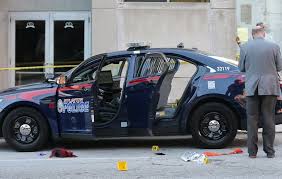 Atlanta police shot and killed a 25-year-old woman, who may have been handcuffed in the back of a police car, after she allegedly pulled a gun and fired twice on Thursday evening, according to The Huffington Post.

Alexia Christian, a Black mother of two, died at a hospital after the alleged gunfight, the report says.

The incident occurred about 4:30 p.m. Thursday, when Christian was placed in the rear of a police vehicle after two police officers, who are Black, claimed they found her inside of a car that had been reported stolen, according to WSB-TV. The officers reportedly searched her and found drugs, but no weapon, the report says.

The woman, possibly handcuffed, somehow got her hands on a pistol and fired at least twice, The Associated Press reported.

Police were investigating whether the officers had handcuffed Christian, and where she had hidden the gun used to fire at the officers, an Atlanta police official told AP. The officers have been placed on leave while the shooting is reviewed.

Investigators have their work cut out for them in this case, including answering how an unarmed woman handcuffed in the back of a police vehicle suddenly found possession of a gun.