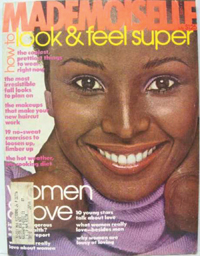 “It is with great sadness that my daughter Dana and I announce the passing of my wife, Barbara Elaine Smith,” Gasby wrote. “Thank you to all the friends and fans who supported B. and our family during her journey. Thank you to everyone for respecting our privacy during this agonizing time.”

Post modeling, the brown-skinned beauty blazed a new trail as an acclaimed restaurateur with her eponymous eateries, which at their peak during the 1990s included three locations—Manhattan, Sag Harbor and Washington D.C.

During the mid-1990s, she was the host of “B. Smith With Style”, a nationally syndicated talk show that was nominated for a Daytime Emmy Award in 2000.

Smith authored three books about cooking and entertaining and became the face of a home goods collection with Bed Bath & Beyond, which was the “first line from an African American woman to be sold at a nationwide retailer,” according to her website.

She also launched a furniture line for the La-Z-Boy company in 2007.

The seemingly idyllic couple, who wed in 1992, became the center of controversy a little more than a year after the book’s publication when Gasby started stepping out with a woman he was dating, Alexandra Lerner.

After publicly announcing on Facebook the choice he made—meeting and falling in love with the younger, leggy blonde—Gasby was excoriated and became the subject of much social media scrutiny.

“After finding happiness with Alex, I shared the relationship on social media,” he shared with the Today show in 2019. “The backlash was swift. People condemned me. They said I was an adulterer and taking advantage of B. and her money.

Buy Diazepam Online Eu Buy Diazepam Online Eu “Many think I am neglecting or abusing B. but that is not the case,” Gasby continued. “I’m having a relationship that is complicated because my wife is no longer my wife. As I said before, I love my wife, but I can’t let her take away my life.”

According to reports, survivors include her stepdaughter, Dana Gasby; two brothers, Ronald and Dennis Smith, and Gasby