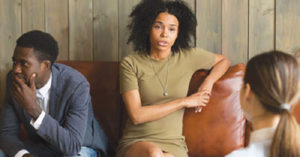 The Center for Urban Families acts as a leading voice in the national conversation on responsible fatherhood and an advocate for child support reform in Maryland. It also counts as a resource that helps nonprofits across the country strengthen low-income families and a support network for Baltimore’s most vulnerable citizens.

Twenty years ago, Chris-ty Lee Shockley was a single mother living in a shelter and unable to keep a job. The trauma she had experienced in her childhood caught up to her and she needed support to realize her potential.

In 1998, Christy saw her chance and bravely enrolled in the first cohort of the Center for Urban Families’ “STRIVE Baltimore program,” where she learned the necessary skills for work, like how to dress for work, how to smile and be present, and how to advocate for professional growth.

Twenty years later, Shockley holds three college degrees, is excelling at work as a government executive, and has three children with her husband of 20 years.

Even more, she has taken lessons learned from STRIVE and her own experiences to mentor young women who face the challenges she once did, according to a news release issued by the Center along with the organization’s 2018 Impact Report.

“We are all the sum total of our life experiences,” Shockley said. Christy said. “My story is one of resilience and perseverance. I tell it proudly, and I do it while smiling.”

Shockley has discovered her voice, found success, and is an economically independent and successful woman. And she credits that jump-start to the Center for Urban Families in Baltimore.

She’s featured in the Center’s 2018 Impact Report, which highlights people who have been pivotal to the organization’s past, present, and future. The core mission of the Center is to strengthen urban communities by helping fathers and families achieve stability and success.

The Center acts as a leading voice in the national conversation on responsible fatherhood and an advocate for child support reform in Maryland.

It also counts as a resource that helps nonprofits across the country strengthen low-income families and a support network for Baltimore’s most vulnerable citizens.

Officials say clients must walk out of the Center’s doors with more than job skills; they must be prepared to succeed in all aspects of their daily life.

“Inspired by our members’ success stories and leaning on their input, we development our new ‘All in’ campaign, a strategy to accelerate social and economic opportunity and advocate for polices that promote equity and racial justice,” Jones said.

“Entering our 20th year of service, we are even more determined to dismantle poverty, not just reduce it,” he said.

“We are tripling down on our efforts to build communities of hope by removing obstacles to prosperity and connecting our members to careers with family sustaining wages.”

The Department of Defense released proposed rules recently targeting the practices of a broad range of high-cost lenders and prohibiting them from charging service members interest rates more than 36 percent. […]

In a deal that reestablishes Essence magazine as a totally, Black and independently-owned entity, Sundial Brands founder Richelieu Dennis recently announced the purchase of Essence Communications from Time Inc. […]