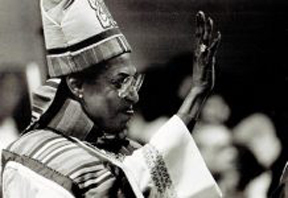 In the middle of Women’s History Month, the Rt. Rev. Barbara C. Harris, a barrier-breaking heroine, the first woman to be ordained and consecrated a Bishop in the global Anglican Communion, died, March 13, in Lincoln, Massachusetts, following a hospitalization in Boston.  She was 89.

The Rt. Rev. Alan M. Gates, Bishop of the Episcopal Diocese of Massachusetts, made the official announcement on March 14.

Bishop Barbara Harris, the first woman to be ordained bishop in the Anglican Communion, died on March 13. She was 89. (Courtesy Photo)

“Our hearts are truly heavy at the loss of one who has been a faithful and altogether irrepressible companion, pastor and inspiration to us in the Diocese of Massachusetts for 31 years,” Gates said in a statement. “At the same time our hearts are truly buoyed by the hope which she preached and the conviction she embodied for us throughout all these years.”

Harris will go down in history books as the first woman ever ordained a Bishop in the Anglican Communion; however, to many she was more- a fearless, unapologetic, witty leader- small in stature but mighty in her passion for God’s people.

“Bishop Harris was not large of physical stature. In fact, the opposite. But she was larger than life. She was larger than life because she lived it fully with her God and with us,” Episcopal Presiding Bishop Michael Curry said, according to the {Episcopal News Service}. “She did it by actually living the love of God that Jesus taught us about. She did it walking the lonesome valley of leadership, paving a way for so many of us whose way had been blocked. She did it lifting her voice for those who had no voice. She did with a joke, a whispered word, a secret joy in spite of anything that got in her way, including death. No wonder she titled her memoir, ‘Hallelujah, Anyhow!’”

An avid freedom fighter, Harris’ fight for justice and doing God’s was not always as a clergy person.

While working in public relations, Harris was also involved in the Episcopal Society for Cultural and Racial Unity (ESCRU) and the National Council of Churches’ Delta ministry.  Through her church-based activism, she helped register Black voters in Greenville, Mississippi and participated in the famous march from Selma to Montgomery, Alabama.

In addition to her faith-led freedom fighting, Harris was an active lay minister and participated in prison chaplaincy and church leadership before officially answering her call to be an ordained servant of God.  Harris was ordained a priest in 1980 at the age of 50 and worked in various duties including priest-in-charge, interim rector, prison chaplain, executive director of the Episcopal Church Publishing Company and publisher of The Witness, a social justice magazine.

Since her groundbreaking consecration, Harris has been one of the most recognized faith leaders in the Episcopal Church and beyond.

“It is almost impossible to imagine the Episcopal Church without Bishop Barbara Harris,” said the Rev. Gay Clark Jennings, president of the House of Deputies, in a statement.

For many, Harris was more than a trailblazing leader, she was someone who other ordained minsters aspired to emulate in their work and action.

“She was a pioneer and ‘shero’ to many of us in ordained ministry,” said Canon to the Ordinary of the Episcopal Diocese of Washington the Rev. Paula Clark.  “I was honored to have her preach at my ordination to the priesthood in 2005, and her charge to us was one given at her own ordination, ‘The [Holy Spirit] Power behind you is greater than any obstacle ahead of you.’ Bishop Barbara Harris kept a slip of paper with this mantra with her at all times. She lived by these words through the myriad challenges and achievements she experienced, and I will always keep this charge from her foremost in my ministry and in my heart,” Clark added.

There will be a public funeral at the Washington National Cathedral, a private graveside service in Philadelphia and memorial service at the Cathedral of St. Paul in Boston. Due to the coronavirus epidemic, specific funeral arrangements will be set at a later date.