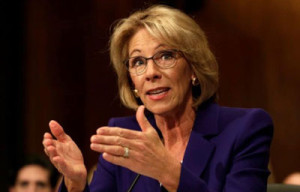 Betsy DeVos tries to apologize for her HBCU comments

Betsy DeVos, the top education administrator in the country, is still trying to figure out what the word “choice” means.

The Secretary of Education spoke to the Associated Press on Wednesday about her “controversial” (read: incredibly a historical and dumb) comments about Historically Black Colleges and Universities (HBCUs), which she called “pioneers of school choice,” as if they weren’t products of total educational racism.

Back then, the only logical thing to conclude was that DeVos had profoundly misunderstood (or maybe, had conveniently forgotten) how segregation was enforced in our nation’s school systems. Surely, if she had, “choice” is not a word that she would have applied.

“When I talked about it being a pioneer in choice it was be-cause I acknowledge that racism was rampant and there were no choices,” DeVos told the AP. “These HBCUs provided choices for black students that they didn’t have.”

Hmm, seems like she’s still not getting how the concept of “choice” works. But hey, maybe DeVos just needs to unpack her thoughts a bit more! Let’s give her one more try.

“My intention was to say they were pioneering on behalf of students that didn’t have another choice. This was their only choice,” said the woman who was heckled and protested by an entire auditorium full of Black graduates and their parents this past spring. “At the same time I should have decried much more forcefully the ravages of racism in this country.”

Without racism, you don’t have segregation—whether legalized or in the de facto form which extended well beyond the Jim Crow South. Without segregated schools, you don’t have HBCUs, which still managed to flourish and produce generations of Black graduates. So to laud them as being pioneers of a non-existent choice without acknowledging the racism that made them necessary is as insulting as it is ignorant.

But what’s worse than what DeVos is saying about school choice is what she may do about it. As an advocate for vouchers and charter schools, her policies at the Department of Education will have a real impact on millions of our nation’s public schoolchildren, a great portion of whom are nonwhite. And recent studies have shown that these programs can have disparate effects on public schools that serve majority Latino and Black students.

In fact, the effect that “school choice” could have on students of color is of such concern that the NAACP and the Movement for Black Lives recently called for a moratorium on these schools.

This was originally published on Splinter News by Anne Branigin