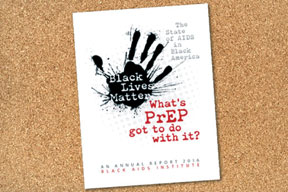 Black AIDS Institute releases 12th Annual State of AIDS in Black America Report: ‘Black Lives Matter—What’s PrEP got to do with it?’

Black Lives Matter: What’s PrEP got to do with it? The State of AIDS in Black America 2016

LOS ANGELES  — Today the Black AIDS Institute, in partnership with Gilead Sciences, is releasing its 2016 report on the State of AIDS in Black America: “Black Lives Matter: What’s PrEP Got to Do With It?” The report focuses on what Black communities need to know about pre-exposure prophylaxis (PrEP) and other new biomedical HIV prevention tools.

Many scientists, doctors and advocates believe that the scientific tools needed to end the AIDS epidemic already exist. Unfortunately, as the persistently unacceptable high rates of new HIV infections underscore, these tools are not being applied effectively in Black communities. While new HIV diagnoses in the U.S. as a whole fell 19 percent between 2005 and 2014, new cases among Black gay and bisexual men, for example, increased by 87 percent.

When used correctly, PrEP has been shown to reduce the risk of acquiring HIV by over 90% for HIV-negative individuals with an HIV-positive partner; however, it is still being underutilized in Black communities.

“The new bio-medical prevention tools will either reduce HIV health disparities or exacerbate them,” says Black AIDS Institute President and CEO Phill Wilson. “Some communities are rapidly adapting to a new world where bio-medical tools to fight HIV are used to dramatic positive effect, but Black communities are not. This report investigates why.”

The report’s key findings include the following:

The report is available online at blackprep.org.

Founded in 1999, the Black AIDS Institute is the only national HIV/AIDS think tank in the United States focused exclusively on Black people. The Institute’s mission is to end the AIDS epidemic in Black communities by engaging and mobilizing Black institutions, leaders and individuals in efforts to confront HIV/AIDS. The institute disseminates information, offers training and capacity building, provides testing and linkage to care, influences both private and public HIV/AIDS policy, and conducts mobilization and advocacy from a uniquely and unapologetically Black point of view. For more information about the Black AIDS Institute, go to www.BlackAIDS.org

“Family caregivers take on big responsibilities that can be physically, emotionally and financially challenging. AARP’s new research shows that this can be particularly true for those caring for loved ones with dementia,” said Nancy LeaMond, AARP Chief Advocacy and Engagement Officer. […]

Reverend Jesse Jackson’s Parkinson’s disease diagnosis caught many by surprise, but those who know him said they’re confident that he’ll overcome the life-threatening challenge before him […]