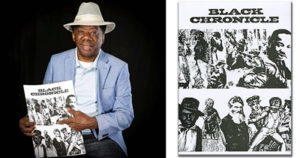 Ben Wilson and his book cover for Black ChronicleNATIONWIDE (BlackNews.com) — Ben Wilson’s Black Chronicle Book I 1778-1956, a Black history publication whose time has come, will be re-issued for the yearlong 400-year celebration of African American history beginning in January of 2019. HR1242, a bill signed into law in 2018 honoring this celebration, will also honor the many contributions made by African Americans to the building of the USA, despite Chattel Slavery, Jim Crow and 2nd class citizenship.

Mr. Wilson compiled this classic work from a series of newsletters by Henry Hampton, producer of Eyes on the Prize. Wilson’s book, written in newspaper format, is designed to facilitate learning, understanding and appreciation of Black history.

Black History starts with humanity’s birth but begins in the English Colony of Virginia / U.S. with the arrival of the first slave ship from West Africa in 1619. These Africans and their posterity would later lose their complete freedom in what may be considered the worst crime ever against humanity, chattel slavery.

Under president Barack Obama’s tenure, the U.S. government apologized for slavery and its role in Black citizens’ loss of basic human and civil rights under the U.S. Constitution. In addition, one of Mr. Obama’s priorities was to tackle the problem of race in the United States. Because of a need to save America’s collapsing economy, this was placed on hold. Saving and building America on one hand while fighting bigotry and oppression on the other, repeats the theme running through Black Chronicle Book I, that reveals the triumphs and tragedies of an oppressed people.

We see this in: The exploited slave labor that provided the financial foundations for future progress.

Black Soldiers participation in all this nation’s wars including key involvement in the Revolutionary and Civil wars.

The enormous contributions made by African Americans in the fields of invention, science, music medicine, agriculture, etc.

The numerous protests and activism, leading the U.S. to live up to its Constitutional creed of Liberty and Justice for all.

Wilson Group Network Inc prints publishes and disseminates information on the history and legacy of African Americans. Founder Maloyd Ben Wilson started the company in 1998. After Securing a B.S. degree in linguistics from Pitt University and was employed as sports editor for the nationally known Pittsburgh Courier.

he youngest and first Black Secretary of BTU, McClary is entirely focused on the lives he could serve, a theme that dominated our conservation […]

From power talking to power doing

From power talking to power doing
[…]