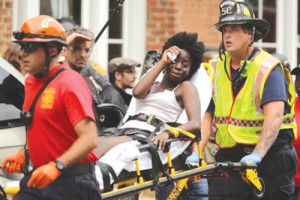 Oakland, CALIF. — Following a white nationalist, Ku Klux Klan-sponsored “Unite the Right” rally in Charlottesville, Virginia, Black church faith leaders and denominations, today joined other clergy in announcing a “Weeks of Righteous Resistance” initiative to push back on hate and racism. Prompted by the hostile treatment of fellow faith leaders — Rev. Traci Blackmon, Rev. Osagyefo Sekou, Dr. Cornell West, Lisa Sharon Harper and others — who were locked inside a local Charlottesville church and terrorized by the KKK, the clergy leaders released the following statement:

“While the world looks at North Korea, Black Americans are looking at Virginia,” said the Rev. Jamal Bryant, pastor of Empowerment Temple AME Church. War is being declared on the Black church and we refuse to be held hostage to fear and terrorized by the alt-right. God is on our side and we will rise.”

“The legacy of racial terror in the south is well documented,” said Dr. Iva Carruthers, general secretary of the Samuel DeWitt Proctor Conference. “Our conference, The Samuel DeWitt Proctor Conference, is named after one of the black church champions for justice. In this spirit and legacy, we condemn the public terror being unleashed on our loved ones in the South and across the country. This wickedness must be met with a united and faithful response. We are here to stand together and help lead this response.”

“Does it bother you that unmasked members of the Ku Klux Klan will likely be in someone’s church singing worship songs, praying, attending a church plant conference, or worse, policing our neighborhoods, teaching our children?” said the Rev. Michael McBride, director of Urban Strategies for PICO National Network’s LIVE FREE program. “Is there not an outrage from white-led churches and organizations to identify these people and warn people of color? Does not the Holy Spirit compel you to preach a message this weekend to convict their hearts and transform their minds? Or are you still silent and complicit as the white nationalist power publicly terrorizes the rest of us?”

The Charlottesville KKK riot comes on the heels of city officials’ decision to remove monuments to Robert E. Lee, a symbolic marker that celebrated slavery and the oppression of African Americans.

“We stand with communities like Charlottesville that are doing the correct and necessary thing to eliminate symbols of white supremacy and racial oppression from public places,” said PICO National Network Executive Director Scott Reed. “Communities that decide to take down statues that venerate racial oppressors and slave owners and rename institutions should not be inti, we strongly support efforts by communities in Virginia and across the country to reckon with their racist past and reject racial intimidation in all its forms.”

“The legacy of the AME church against white supremacy and the KKK is a hallmark of the Black church,” said Bishop Frank Reid, African Methodist Episcopal Church. “We condemn the evil in display in Virginia and we are hearing this is spreading across the country. We call on true followers of Jesus and all children of God to resist this evil now.”

“Nothing about white nationalism flows from the heart of God,” said Mark Labberton, president of Fuller Theological Seminary. “May white, and all, followers of Jesus say and live a resounding NO to any form of white nationalism.”

For more information on the Weeks of Righteous Resistance, visit www.thisisworr.org.

The race war in America

The race war in America […]