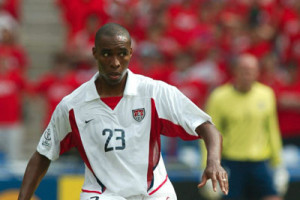 Black History Month: Soccer is a religion, and America has a Pope

Eddie Pope is the greatest American defender ever. This is why.

Soccer is the world’s game, the beautiful game. For many, it’s even more than a game…it’s a religion. Every weekend, we put on the uniform of team and celebrate them at stadiums we call cathedrals. It consumes our daily lives, and we thank whoever we believe is in that upper room for players like Messi, Ronaldo, or Pele.

Well, if you believe soccer is a religion in the United States, you know we have a Pope…George Edward Pope, to be exact, who we know as Eddie. Eddie Pope is, most will say and I will say here, the greatest American defender ever. He got his start in Greensboro, North Carolina, where he starred in high school before moving on to become an All-American for the University of North Carolina Tar Heels (and kicking on the football team on the side).

It was in 1996 that Eddie Pope began to grow into the fierce defender that we know and love. He was drafted 2nd overall in the 1996 MLS College Draft by D.C. United, and split time between D.C. and the men’s Olympic team at the 1996 Summer Olympics in Atlanta. But, he went down in Major League Soccer and D.C. United history by heading home the game-winning goal in overtime in the 1996 MLS Cup final:

Eddie Pope continued to dominate MLS, winning the MLS Defender of the Year and MLS Best XI along with a 2nd MLS Cup. In 1998, he scored the game winner for D.C. United in the InterAmerican Cup, and he helped United to victory in the CONCACAF Champions Cup. Injuries plagued his next few seasons, but when Pope was healthy, he was still the best defender in the league, eventually winning a 3rd MLS Cup with D.C. United and playing in several MLS All-Star Games. Pope finished his career with stints with the New York/New Jersey Metrostars and Real Salt Lake before he retired in 2007.

On the national team, Eddie Pope secured his status as America’s greatest defender. He joined the team in 1996 and helped the team to the CONCACAF Gold Cup final in 1996, which included a 1-0 victory over Brazil. He immediately made his mark in World Cup qualifying, scoring a goal against Mexico as part of a thrilling 2-2 draw in 1997. Pope was a mainstay in the American starting defense for 3 World Cups (1998, 2002, 2006). Every game he played for the USMNT, he was in the starting XI.

Pope could do it all. Not only was he a strong defender who always knew where he needed to be on the field, he could score with his head or his foot. Against Mexico in 2004, he hammered home a rebound late in stoppage time to beat El Tri at the Cotton Bowl in Dallas:

He was always in the right place at the right time, and each goal celebration was capped off by him backpedaling to the corner flag with a look of triumph on his face. His final USMNT goal, against Japan in the lead-up to the 2006 World Cup, was a perfect one to end his scoring tally for the United States:

Eddie Pope retired from the international game after the 2006 World Cup, with 82 caps and 8 goals. His 31 World Cup qualifying appearances at the time of his retirement was tied with Kasey Keller and Claudio Reyna for most in U.S. Soccer history. In 2011, he joined a class including Cobi Jones and Earnie Stewart as the trio was inducted into the U.S. Soccer Hall of Fame.

There was no defender like Eddie Pope. The way he played, the strength with which he played, and his cerebral play has yet to be duplicated, only imitated. So many players who have come after Eddie Pope have considered him a role model and a player after which they styled their game. When Eddie Pope was penciled in on the USMNT back line, there was a calm among fans and amongst the team. Everything was going to be okay, because we had a Pope on our side. When it comes to defenders, Eddie Pope was a monster. Eddie Pope was legendary, and he’s the gold standard of American soccer players. Amen.

The Black come up

Children on the Front Lines

Children on the Front Lines […]

Race still plays a significant role in determining who gets ahead in America, says Clinton

Race still plays a significant role in determining who gets ahead in America, says Clinton
[…]