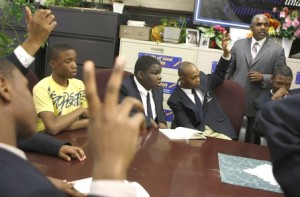 W.E.B. Du Bois the American civil rights leader who cofounded the NAACP, had a very high opinion of Black men who graduated from college and designated them as the “Talented Tenth”. In fact they were considered the cream of the crop and that label still holds true today.

But statistics demonstrate that more Black women are obtaining their college degrees than Black men. Nonetheless for the Black males that are on top of their game, the Westside Gazette presents a comprehensive study on how Black men not only made it – but also finished their collegiate endeavors.

“Black men’s dismal college enrollments, disengagement and underachievement, and low rates of baccalaureate degree completion are among the most pressing and complex issues in American higher education,” as noted in a report entitled Black Male Student Success in Higher Education: A Report from the National Black Male College Achievement Study. “Perhaps more troubling than the problems themselves are the very way they are continually mishandled by educators, policymakers, and concerned others.”

The report is based on the National Black Male College Achievement Study, which is by far the largest ever qualitative research study of Black undergraduate men.

Key insights are offered on success from achievers at 42 colleges and universities in 20 states across America.

For instance, highly selective private research universities such as Harvard University had 252 Black male undergraduates within the six-year time frame of the study and there was a 93.5 percent graduation rate.

A total of 219 Black males were interviewed for the report and each came from diverse demographics such as low income, middle class, affluent, single parent, versus both parents at home.

Some of the participants were first generation college students and a number of them had family and friends attending college in which they were able to be role models.

“I am tired of seeing so many people around me, as far as like family and friends, fall by the wayside,” said Raymond Roy-Pace, graduate of Lock Haven University. “My success helps somebody else who came from the same underprivileged environment that I came from realize success is possible.”

Several of them had friends who dropped out of high school and were incarcerated.

Most surprising and most disappointing is that nearly every student interviewed said it was the first time someone had sat him down to ask how he successfully navigated his way to and through higher education and what he learned that could help improve achievement and engagement among Black male collegians,” said Dr. Shaun R. Harper, Director, Center for the Study of Race and Equity in Education, [author of the report] at University of Pennsylvania Graduate School of Education. “

Florida A&M University, which is a public HBCU, had 3308 Black males enrolled during the study and finished with a 28.4 percent six-year graduation rate.

On the other hand Howard University and Morehouse College, which are both private HBCU’s, had 1422 and 2536 Black males enrolled and ended correspondingly with 61.7 and 60.7 percent six-year graduation rate.

Harper points out in the study that despite high levels of leadership in student organizations and campus activities, participants almost unanimously asserted that their same-race male peers were considerably less engaged in their academics.

“The majority of Black undergraduate men devoted their out-of-class time to playing video games and sports, pursuing romantic relationships, and gathering socially with others in designated hangouts on campus.” Harper said. “Disengagement is a major factor in explaining poor academic performance and high rates of attrition among Black undergraduate men at their institutions.”

On Friday, the Jefferson City branch said Mizzou students can call 1-844-NAACP-HELP to anonymously report threats to law enforcement. Students who live off campus and in the surrounding areas of Mizzou are also welcome to […]